Omar Shakir, Human Rights Watch director for Israel and the Palestinian territories, is to be deported from Israel today over his support of a boycott of the country.

And let’s be clear: despite claims otherwise, he absolutely has been supporting BDS while working here as part of HRW.

But there’s something else that seems to have gone unnoticed.

Despite criticizing Hamas for humans rights abuses against its own people (and even, on occasion, for antisemitism and firing rockets against Israel civilians), Shakir recently seemed to be implying that Hamas is a “freedom movement.” 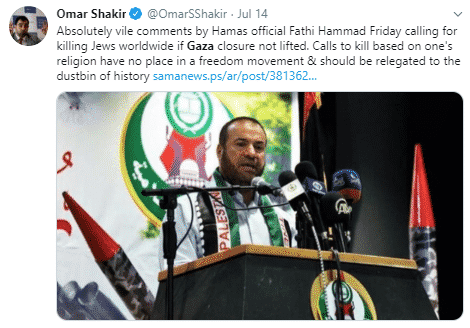 I have read and re-read this tweet and asked others whether this interpretation was a stretch. Everyone I asked agreed that this is what he seems to be saying. He did not call it a “so-called” freedom movement after all.

Given he is a former co-president of Students for Palestinian Equal Rights (SPER), the forerunner to Students for Justice in Palestine (SJP) at Stanford University, I am not surprised if he views Hamas this way. I am just surprised he seems to have let down his guard and blurted this out loud.

Meanwhile, a group called Humanity 4 Palestine has put out a sob video of Shakir and his last hike here.