At the beginning of this month, terror-supporting, antisemitic organization National Students for Justice in Palestine (NSJP) held their 2019 conference. There was little publicity surrounding the event – before, during, and after – with a real shroud of secrecy involved.

Usually, when people hide their faces, it means they have something to hide.

Even the building wore a mask

According to [pro-Israel campus group Students Supporting Israel (SSI)] co-founder Ilan Sinelnikov, the event was held in a building closed to the public, with curtains down over the windows. Students who walked in and out of the building “covered their faces like criminals.”

Though the University of Minnesota is a public university, registration, entrance, and attendance at the 2019 SJP conference was tightly controlled. It appeared that, though it was organized and partly funded by a registered student association and held directly on campus, the conference was barred to non-SJP students.

There also did not appear to be any mention of the event on the University of Minnesota’s student event page, though other SJP events have been posted.

Press coverage of the conference was evidently to be limited to pre-approved reporters from SJP-friendly organizations and publications, and the rules governing documentation of the conference stated that recording without prior authorization was also forbidden.

As you may recall, the number of registered attendees on Facebook was well below previous years.

This may not have been a fail after all, but rather reflecting that many, many students did not make their planned attendance known.

Clearly, they had something to hide and my guess was they understood the terror-support and even possibly antisemitism on display would have gone down about as well as their fundraisers – like a lead incendiary balloon. And I am sure they realized sites like this would be shining a spotlight on it, as I have been on them for quite a while now.

Which I am going to do anyway, thanks to a detailed Legal Insurrection investigation that indicates my suspicions were true.

Despite the closed nature of the SJP conference, SSI and RoD managed to share some material from the event. In one mailing, SSI and RoI sent out this image of an SJP conference presentation, noting that the slide glorified Ahmed Sa’adat, a leader of the organization Popular Front for the Liberation of Palestine (PFLP)—which has been officially designated as a terrorist group by the United States, the European Union, Canada, Australia, and Japan. 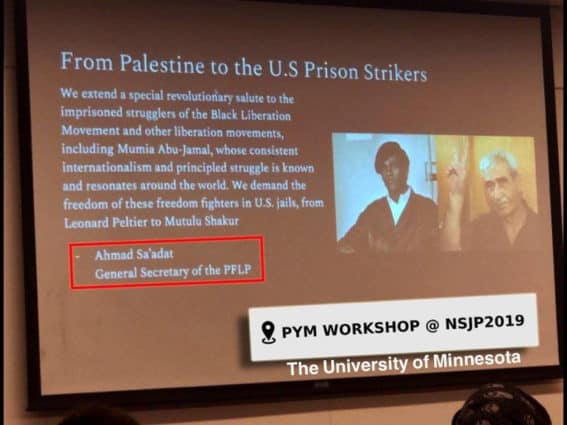 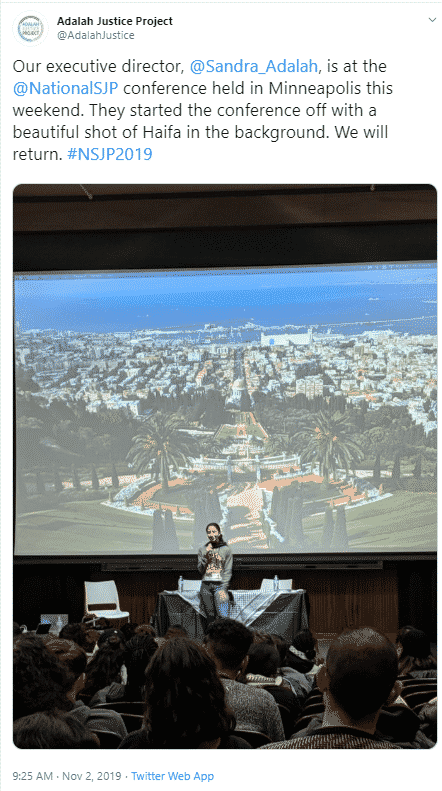 A tweet by anti-Israel NGO Adalah showing its executive director giving a presentation at NSJP 2019. She uses a picture of the Israeli city of Haifa with a popular phrase implying that Palestinian Arabs will eventually all return to Israel and erase it Jewish character by overtaking the demographic Jewish majority.

An NGO called the Palestinian Youth Movement, whose member Dr. Loubna Qutami was the conference keynote speaker, posted a short clip of her speech at the conference.

For her part, Qutami is pro-BDS, has voiced her support for convicted terrorist Rasmeah Odeh, and has reportedly blamed Palestinian-Arab gender violence on the “Occupation”.

Read the entire Legal Insurrection post, which also takes the University of Minnesota to task for sweeping the event under the carpet, “despite the secretive and exclusionary practices the 2019 NSJP conference employed on campus—and the apparent violation of state ordinances.”