Following Donald Trump’s pro-Israel speech at the IAC National Summit – a speech that was ridiculously labelled antisemitic – actual antisemite Linda Sarsour has pounced on the opportunity to do one of the things she loves doing: gaslight proud Jews. 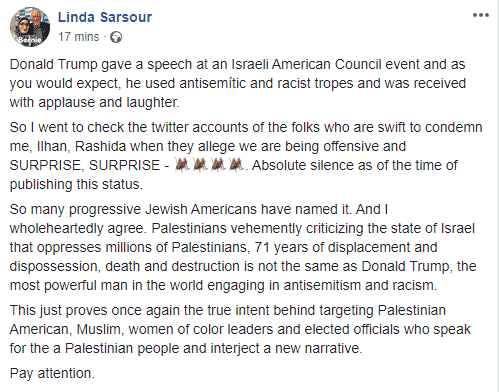 Besides laughably accusing someone else of using antisemitic and racist tropes (projection, much?), note how she implies these tropes being warmly received by the pro-Israel crowd “with applause and laughter” was as expected. In other words, she is actually accusing proud, Zionist Jews of themselves being antisemitic!

Sarsour also lies when she suggests “the folks who are swift to condemn me, Ilhan, Rashida when they allege we are being offensive” have been silent. I, for one, have been very outspoken in calling out those who claim Trump was being antisemitic.

She’d know that had she not blocked me. 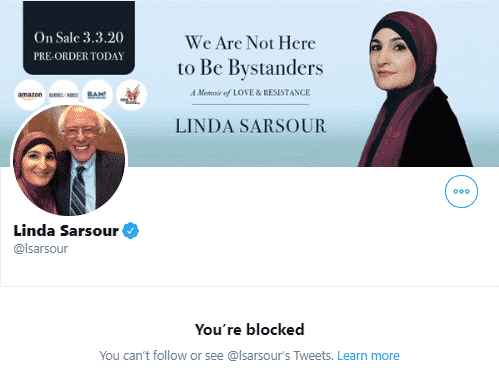 Sarsour ends her gaslighting gobbledygook with

This just proves once again the true intent behind targeting Palestinian American, Muslim, women of color leaders and elected officials who speak for the a Palestinian people and interject a new narrative

The implication is anyone who criticizes them are actually only doing so because we are, ourselves, Islamophobic and racist.

Of course, the reason is because they are actually vile Jew haters – something that cannot be said for President Trump.