Yesterday, I posted about an attempted palestinian propaganda snow job, with a hater trying to pass off a kid from Kabul from over a decade ago as a kid from Gaza at the end of last year.

The hater was not alone. Just this week another one tried to sting like a bee with this tweet (hat tip: Maks) 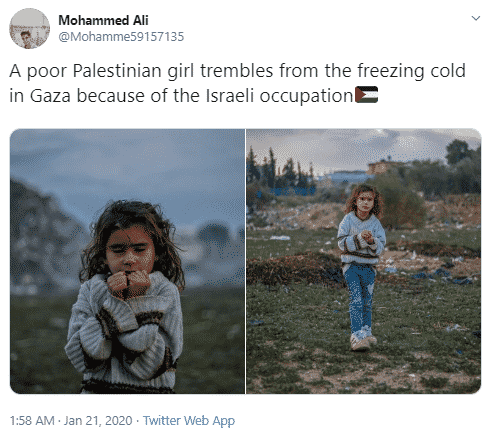 Clearly, the photographer was not just minding his own business before stumbling across a girl in the middle of a field on a freezing Gazan day, with all of his equipment, before deciding to take her photo. This was clearly staged.

You’d like to think had she really been freezing, he would have bundled her up in warm clothes or rushed her off to a warm place. But I doubt he would have, given he likely deliberately took her outside to pose her for this picture.

No, had she been trembling from the cold, it was not because of the “Israeli occupation.” It was because of his occupation – as a propagandist.

But was it freezing cold? Mohammed Ali tweeted this out at 1:58AM on January 21st, which means it may have been taken on January 20 or perhaps even earlier. Say it was taken some time in January before the 21st – the temperature never dropped below 7 degrees celcius (and even then, it reached that temperature at 6am). That’s cold but I wouldn’t call it freezing cold. And I am guessing the photo was taken at a normal time of the day, so was likely warmer than this at the time.

Heck, even Gazans themselves admit it has not been cold enough. 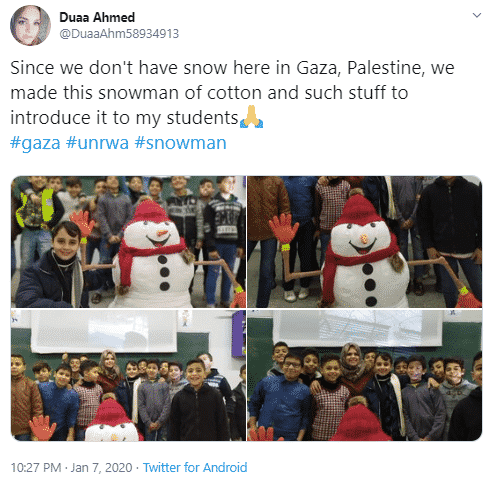