Toronto’s York University has long been on our radar as a cesspool of antisemitism and Israel hatred. So the following does not surprise me.

The York Federation of Students‘ Multicultural Week Parade is a yearly exhibition of the diversity at York where everyone has a chance to express their love for their cultures and be celebrated for doing so with their campus community. This year, however, that inclusive spirit excluded Jewish students. The opening ceremony was performed by a student wearing a shirt that reads “Anti-Zionist vibes only”.
This is just another example of the combative and discriminatory environment the YFS has created for Jewish and Zionist students, especially in the last few months. This is not a valid critique of Israeli policies or actions. It is a rebuke of the national movement for Jewish self-determination which, in effect, is antisemitic.
Hillel York condemns this antisemitic act against the Jewish campus community, especially on International Holocaust Remembrance Day. The YFS should issue an apology immediately for allowing such vile antisemitism during what is meant to be a celebration of diversity and inclusion.
Students who wish to discuss this issue further should contact Hillel York staff directly.

This vile woman gets bonus evil points for doing this during Multicultural Week and on International Holocaust Remembrance Day.

She’s the same unhinged protester you see at the beginning of this video of an antisemitic protest at York a few months ago.

Here, I fixed it for you. 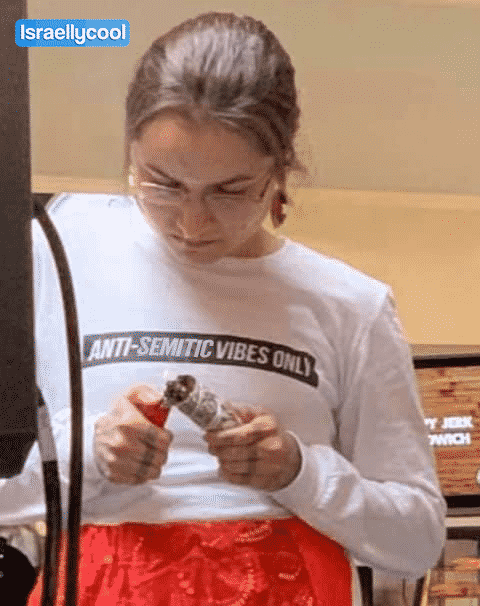 Update: And the Jewish students fight back.