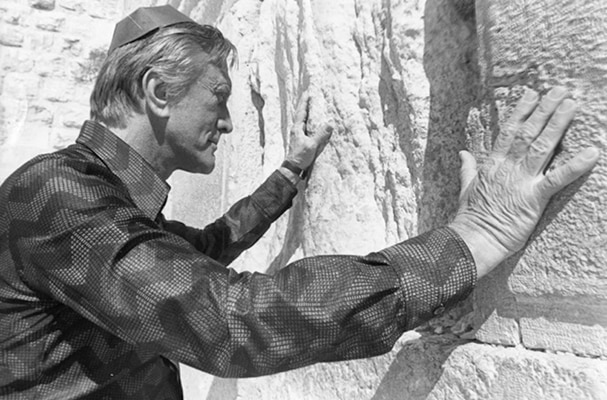 Hollywood icon Kirk Douglas (aka Issur Danielovitch Demsky) has passed away at 103.

There are understandably plenty of tributes online, so I want to focus on his Judaism and love of Israel.

Besides being a legendary actor, Kirk was also a proud Jew (albeit later in life). From a 2000 interview with Aish HaTorah:

Judaism and I parted ways a long time ago, when I was a poor kid growing up in Amsterdam, N.Y. Back then, I was pretty good in cheder, so the Jews of our community thought they would do a wonderful thing and collect enough money to send me to a yeshiva to become a rabbi. Holy Moses! That scared the hell out of me. I didn’t want to be a rabbi. I wanted to be an actor. Believe me, the members of the Sons of Israel were persistent. I had nightmares – wearing long payos and a black hat. I had to work very hard to get out of it. But it took me a long time to learn that you don’t have to be a rabbi to be a Jew.

Although he says he embraced his Judaism only in 1991 following a near-death experience, he could not hide his pride in being Jewish and in the Jewish state, as evidenced by many of his roles. Kirk himself noted, the underlying theme of some of his films, including The Juggler (1953), Cast a Giant Shadow (1966), and Remembrance of Love (1982), was about “a Jew who doesn’t think of himself as one, and eventually finds his Jewishness.”

Not only that, but he was involved in a number of films revolving around Israel, or even filmed here.

The Juggler was the first Hollywood feature to be filmed in the newly established Jewish state. He recalled that while there, he saw “extreme poverty and food being rationed.” But he found it “wonderful, finally, to be in the majority.” Its producer, Stanley Kramer, tried to portray “Israel as the Jews’ heroic response to Hitler’s destruction.”

In Cast a Giant Shadow, also filmed here, Kirk played a Jewish-American war hero that is recruited by the State of Israel to establish its army in the days leading to the War of Independence.

He also starred in Victory at Entebbe (1976)

and Remembrance of Love (1982), also filmed in Israel.

Needless to say, his support for Israel was not confined to the acting roles he chose. He gave millions of dollars to charitable causes in the United United States and Israel, including playgrounds in poorer sections of Jerusalem, and a theater facing the Western Wall featuring films on the history of Judaism and Jerusalem.

He even once featured in a video for the Technion.

He noted in his memoir, Let’s Face It (2007), that he felt compelled to write to former president Jimmy Carter in 2006 in order to stress that “Israel is the only successful democracy in the Middle East … [and] has had to endure many wars against overwhelming odds. If Israel loses one war, they lose Israel.”

He truly was a lover of Zion. 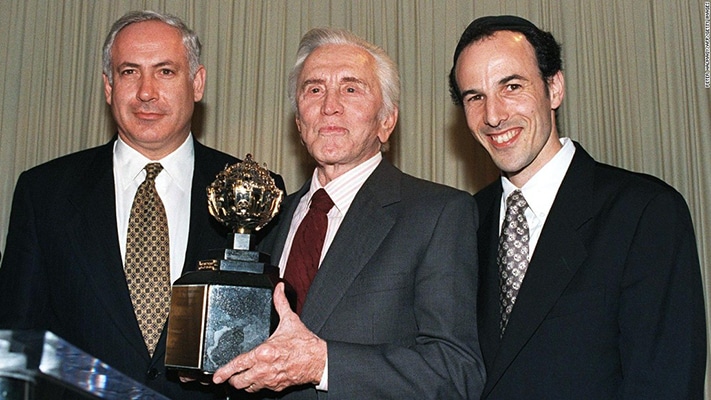