Remember all those scam fundraising campaigns supposedly for palestinian Arabs in desperate need?

Here’s one from a palestinian Arab with a twist or two.

First twist: He wants to escape Brooklyn and return to “palestine”

Second twist: He is asking for 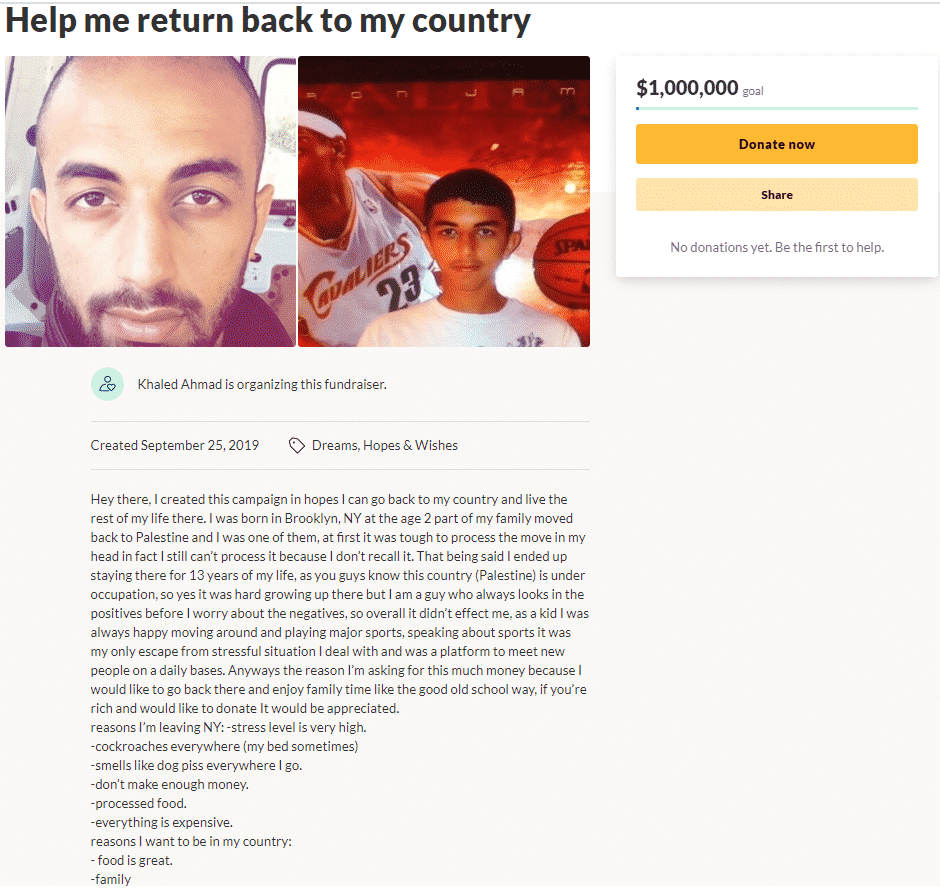 Hey there, I created this campaign in hopes I can go back to my country and live the rest of my life there. I was born in Brooklyn, NY at the age 2 part of my family moved back to Palestine and I was one of them, at first it was tough to process the move in my head in fact I still can’t process it because I don’t recall it. That being said I ended up staying there for 13 years of my life, as you guys know this country (Palestine) is under occupation, so yes it was hard growing up there but I am a guy who always looks in the positives before I worry about the negatives, so overall it didn’t effect me, as a kid I was always happy moving around and playing major sports, speaking about sports it was my only escape from stressful situation I deal with and was a platform to meet new people on a daily bases. Anyways the reason I’m asking for this much money because I would like to go back there and enjoy family time like the good old school way, if you’re rich and would like to donate It would be appreciated.
reasons I’m leaving NY: -stress level is very high.
-cockroaches everywhere (my bed sometimes)
-smells like dog piss everywhere I go.
-don’t make enough money.
-processed food.
-everything is expensive.
reasons I want to be in my country:
– food is great.
-family
-nice weather
-restful sleep

Reasons I want a million:
-want to be rich.
-economy in my country is bad.
-tired of work.
-look at my hair 🙁
-move back to Palestine.

Funnily enough, he did not raise any money. Which is perhaps part of the reason for the third, most insane twist of all…

A Brooklyn man suspected of butchering his father walked into a bagel shop near the grisly crime scene and claimed he not only killed his dad — but also devoured parts of his body, police sources told The Post on Thursday.

Khaled Ahmad allegedly walked into Park Bagels drenched in blood Wednesday, ranting to a clerk about the murder, a high-ranking police source said.

“One of the store’s owners alerted the officer who was outside that it appears his partner was having an interaction with a person that they know is a regular and is crazy,” according to the source.
“The perp was ranting about how he killed and ate his father and had visible signs of blood on him.”

The two had been holed up in the family’s Dyker Heights home during the coronavirus outbreak.

Ahmad, who was charged with murder and weapons possession, later denied to detectives that he had eaten parts of his father’s body, source said.

According to a GoFundMe page he posted last year, the younger Ahmad was unhappy about living in Brooklyn and sought $1 million to return to the Palestinian territories to be with his family.