How Should We Deal With the Fact That Black Lives Matter Has an Antisemitism Problem? 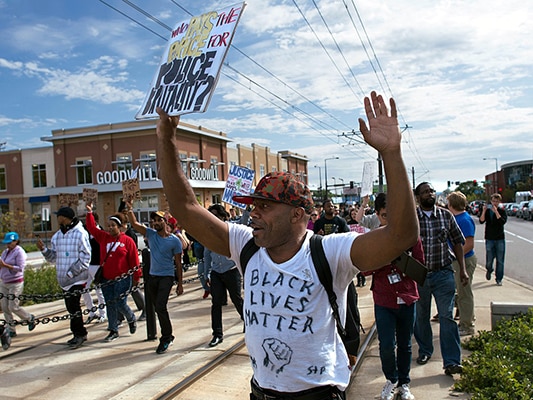 With the US practically imploding in the face of riots following the murder of George Floyd, there has been a real schism in the Jewish community regarding the correct way to react. This schism exists at least partly because of the antisemitism within the Black Lives Matter movement.

This antisemitism is manifest in a number of ways. Back in 2016, The Movement for Black Lives, a group affiliated with the Black Lives Matter movement, released its platform included a foreign policy section falsely accusing Israel of perpetrating “genocide” against palestinians, labeling Israel an “apartheid state,” and promoting BDS.

Alan Dershowitz noted at the time:

To be sure, Black Lives Matter is not a monolithic organization. It is a movement comprising numerous groups. Many of its supporters have no idea what the platform says. They cannot be faulted for supporting the movement or its basic mission.

But the platform is the closest thing to a formal declaration of principles by Black Lives Matter. The genocide paragraph may well have been injected by radicals who are not representative of the mainstream. But now that it has officially been published, all decent supporters of Black Lives Matter — and there are many — must demand its removal.

And removed it was. Or perhaps just moved. While that part of the policy document is no longer found online, this is. It links to this further document with the same problematic language.

There also seem to be links between BLM leaders and the antisemitic Nation of Islam. For instance, local BLM leader Tami Sawyer has been an introductory speaker for vile Jew-hater Louis Farrakhan. And prominent BLM activist Shaun King has defended him. Even now, they publicly associate themselves with the Nation of Islam.

Then there’s the clear manifestations of antisemitism we are seeing now with BLM and the riots. The dissemination of antisemitic materials by some BLM members (including famed rapper Ice Cube tweeting out an antisemitic mural); synagogues, Jewish-owned buildings and stores being defaced with anti-Semitic graffiti, presumably by BLM protesters (but could also have been antifa or other outside instigators); the guy threatening to burn down the (Jewish) “Diamond district.”

So it is clear there is an antisemitism problem with BLM, at least with some of the leaders and members. And this has only gotten worse, thanks to the efforts of palestinians and Israel-haters/antisemites to hijack the movement and inject their bogus cause into it.

The question is: what should us Jews do about it?

On one side, you have those who want nothing to do with the protests or the injustices they are supposedly trying to redress. Intermingled with the BLM movement issue are arguments that these protests are not really about systemic racism against Blacks, and systemic racism against Blacks actually does not exist. Regarding the first point, I believe while some protesters clearly have a different, subversive agenda, this is not the case with the majority. Regarding the latter point, this post by Rabbi Uri Pilichowski best sums up how I have been feeling:

While my research has shown that statistics back up black claims that they are being treated unequally, it doesn’t matter. Black people FEEL they are discriminated against. A Jewish value is empathy and that means helping people feel loved. The same way we don’t tell a sick person that they’re really not as ill as they think, we don’t lecture black people that they’re not really being discriminated against. We do not tell them it’s their actions that caused their plight. We do not act like Iyov’s friends. We act compassionately, with love, and most of all, empathy.

On the other side, there are those who argue we should ignore BLM movement’s anti-Israel positions. Israel activist Hen Mazzig writes:

The black community in America needs and deserves our voice and support. We must not allow the few activists trying to turn this important cause into an anti-Israel campaign to succeed…Instead of worrying about minority groups turning against Jews, we should be asking how can we show we haven’t turned our backs on them.

BLM was not founded on the values of the boycott, divestment and sanctions (BDS) movement. When the official Movement for Black lives platform was written, the work was divided. The section about Israel was written by only three people. One of them was Nadia Ben-Youssef, the American director of Adalah, the Legal Center for Arab Minority Rights in Israel, who is not black. Another was Rachel Gilmer of Dream Defenders, a Jewish anti-Zionist, also not black.

Why were these women able to impart their anti-Israel policies on the Black Lives Matter platform? They were deeply committed to the movement. Pro-Israel voices, like the ones in my replies, were not.

Right now, the world is taking stock of who is in and outside the room. Although countless Jews and Zionists support Black Lives Matter — there were even multiple protests in Tel Aviv in solidarity with Black Americans — these voices railing against the movement undo some of that unifying work.

If you want to change Black Lives Matter Israel agenda, you need to show up for them. Because by showing up for racial justice, we are actually showing up for ourselves.

I have a number of issues with Mazzig’s piece. For a start, he glosses over the antisemitism, making this more about their “anti-Israel” views, which he portrays as being only from a”few activists.” He minimizes the importance of the anti-Israel (but I call it antisemitic) part of their platform, even though Alan Dershowitz was correct in calling it the closest thing to a formal declaration of principles by Black Lives Matter. His insinuation that we will somehow fuel antisemitism by standing up for ourselves is highly naive, and frankly offensive. And he conflates standing up for Black rights (or agreeing with the notion of Black lives mattering) with the BLM movement.

Once again, Uri Pilichowski nails it for me:

The organization Black Lives Matter is a hateful, despicable and antisemitic organization…Jews should NOT work with them. Black Lives Matter is also a painful rallying cry that screams, “Treat us equally.” It does not mean that white, Jewish, or Asian lives don’t matter. It doesn’t mean black lives matter more than white lives. It means that black people feel their lives have been worth less than white people’s lives in America.

We should NOT work with the Black Lives Matter organization, but we MUST work to make sure black lives matter. Dismissing your Jewish responsibility to help black people because ONE black organization is anti-semitic is analogous to refusing to help Israel because you don’t like AIPAC. There are hundreds of ways to help black people. Pick one that you like.

Having said this, we should not remain silent about the antisemitism we are seeing. We must condemn the antisemitic statements, materials and acts, whether perpetrated in the name of the BLM movement or others. Speaking up does not fuel antisemitism. Antisemitism left unchecked fuels antisemitism.

I believe we should stand up for the rights of our Black brothers and sisters because it is the right thing to do.

I also believe we should also stand up for ourselves, because it is the right thing to do. And we cannot rely on others to do so.