Why Doesn’t Black Lives Matter Speak Out Against Discrimination of Afro-palestinians in Palestinian Society?

In case you missed it, the Black Lives Matter organization in the UK yesterday got their Jew-hatred on, using the antisemitic trope that British politics is “gagged” in terms of debating Israel, a claim “particularly preposterous because Israel is one of the most-discussed foreign policy issues in this country.” 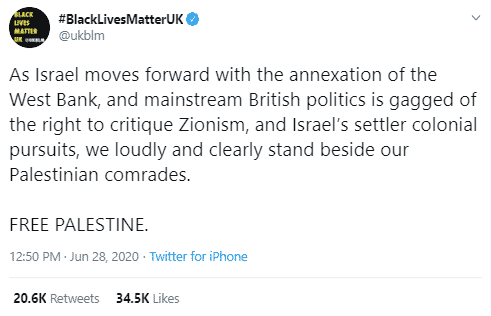 They then followed this with another 11 tweets on the topic.

And here’s the thing: If they were truly about Black lives mattering, why don’t they ever speak out against the Arab-Muslim slave trade?

As to the Arab-Muslim slave trade, Ghanaian professor and minister John Azumah helped set the record straight in “The Legacy of Arab-Islam in Africa.” In an interview about his book, Azumah said the following:

“While two out of every three slaves shipped across the Atlantic were men, the proportions were reversed in the Islamic slave trade. Two women for every man were enslaved by the Muslims.

“While the mortality rate of the slaves being transported across the Atlantic was as high as 10%, the percentage of the slaves dying in transit in the Tran-Saharan and East African slave market was a staggering 80 to 90%.

“While almost all the slaves shipped across the Atlantic were for agricultural work, most of the slaves destined for the Muslim Middle East were for sexual exploitation as concubines in harems and for military service.

“While many children were born to the slaves in the Americas, the millions of their descendants are citizens in Brazil and the United States today. Very few descendants of the slaves who ended up in the Middle East survived.

“While most slaves who went to the Americas could marry and have families, most of the male slaves destined for the Middle East were castrated, and most of the children born to the women were killed at birth.

“It is estimated that possibly as many as 11 million Africans were transported across the Atlantic, 95% of which went to South and Central America, mainly to Portuguese, Spanish and French possessions; only 5% of the slaves ended up in what we call the United States today.

“However, a minimum of 28 million Africans were enslaved in the Muslim Middle East. Since at least 80% of those captured by the Muslim slave traders were calculated to have died before reaching the slave markets, it is believed that the death toll from 1,400 years of Arab and Muslim slave raids into Africa could have been as high as 112 million.”

And why don’t they ever speak out in support of the Afro-palestinians, many of whom are descendants of these slaves, and against the palestinian Arabs who discriminate against them? 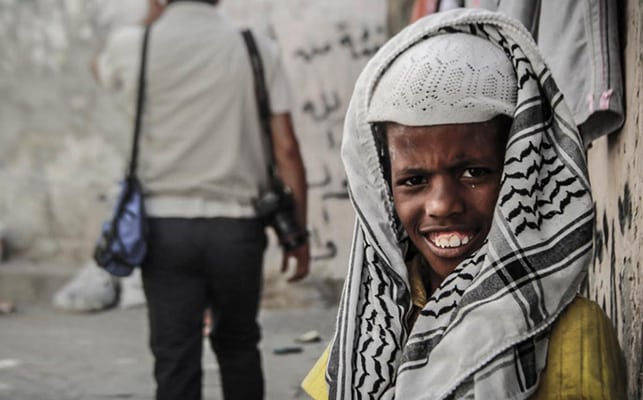 Afro-Palestinians reside in various Palestinian cities, with large communities in Jerusalem, Gaza and the West Bank town of Jericho.

Some are the descendants of slaves or soldiers brought in during Ottoman times. The forefathers of Jerusalem’s African Quarter are mostly Muslim pilgrims from Chad, Sudan, Nigeria and Senegal who settled here or got stuck during periods of war.

Historic Palestine was a crossroads for different cultures, and some Palestinians trace back their roots to a range of non-Arab groups, from Kurds to Indians and Afghans. Afro-Palestinians were denied Jordanian citizenship after the 1967 war, as they were not seen as Palestinians.

Despite these deep roots to the area, some Palestinians still refer to them with a local derogatory term, “abeed,” Arabic for “slaves,” and to their neighborhood as “habs al-abeed” or the “slaves’ prison.”

“We fought the usage of this term and mentality for many years,” Quos said. “Less people use it now.” But he said racism can still surface, in marriage proposals, for example.

“Sometimes when a black Palestinian wants to marry a white Palestinian woman, some members of her family might object,” he said. “It’s not a phenomenon, and recently, there have been more inter-marriages.”

“More Catholic than the Pope? We are more Palestinian than Palestinians,” he said.

At least 11,000 black Palestinians live in Al Jalla’a district of Gaza in a neighbourhood called “Al Abeed” which means slaves in Arabic.

Among friends and co-workers, Obaid is known as Samara — which means dark skinned.

Although there is no official discriminatory policy against black Palestinians, Obaid says that subtle racism makes his life more difficult than lighter skinned Palestinians.

“If I wasn’t the best dancer, I wouldn’t be on the Dabke team,” he said.

“I always have to prove myself twice as much as others.”

Many black Palestinians are not considered for jobs that require direct communication or interaction with customers.

The majority of Palestinians do not marry black Palestinians, although recently there have been some changes in mentality.

“Where I live, people accept to marry black Palestinians, but in other areas it is strictly forbidden,” he said.

It is worse for black Palestinian women — while dark-skinned men may be able to marry light-skinned Palestinians, the reverse is mostly not accepted.

“I knew a couple who were in love but the father of the would-be groom threatened to renounce him in the newspapers. Sadly, they separated,” he said.

And Obaid says the security forces have been recently very harsh on black Palestinians.

When the cops pulled him and his friends over recently, he was the only one from the passengers pulled out for further security checks.

He took his anger out by writing a poem directed at the police entitled “Blacks are not security suspects”.

Despite facing bouts of racism, he said he never thought about leaving Gaza until recently.

“The police treatment has gotten worse, so for the first time I thought about leaving.”

The answer is, I believe, that they are less about Black lives mattering than Jewish lives not mattering. They are, after all, fine with promoting antisemitic tropes while opposing the movement for Jewish self-determination in their historical homeland – all while ignoring the treatment of Black people in the Arab-Muslim world, including at the hands of palestinian Arabs.