BLM is Not MLK 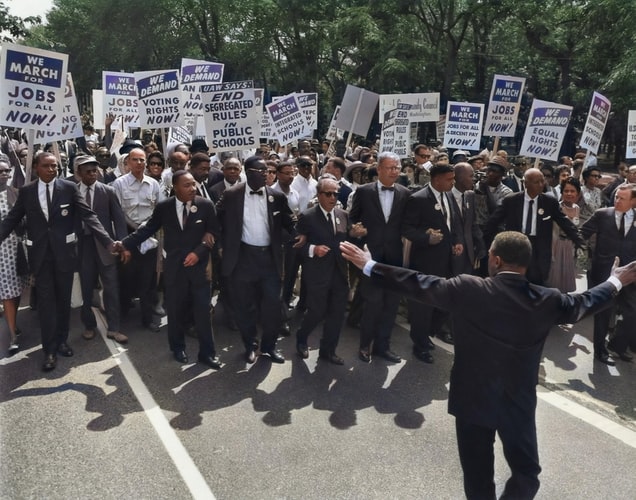 MLK in the March on Washington for Jobs and Freedom, in Washington, D.C. on Wednesday, August 28, 1963. The purpose of the march was to advocate for the civil and economic rights of African Americans. Source

As a black man, a half-black man, a person of color, or however you would like to call me, I have been labeled by both black and white supporters of Black Lives Matter (BLM) as racist. This, for no other reason than I expect civilized behavior from people who have been awarded the “privilege” of being part of a civilized society. That includes those who have the same skin color as me. The idea that I am morally obliged to support BLM just because I am black, is – to put it mildly – an ignorant lapse of good judgment.

Under the respectable banner of “organization,” which implies some adherence to a law-abiding code, BLM has only coaxed mob values around the world. Their website states their mission:  “Empowering black people,” “dismantling cisgender privilege,” “disrupting the Western-prescribed nuclear family structure” and “dismantling the patriarchal practice in society.” By their own admission, BLM is bent on tearing apart Western-society.

My first encounter with this anti-Western movement was with an intern from the BBC. In response to an article which I had written to discuss the daring leadership of Winston Churchill, the intern ranted. Comparing him with Hitler, Mao, and Stalin, she was  unperturbed that if it wasn’t for Churchill, all Europeans would be speaking German today and swearing allegiance to an obnoxious and tyrannical flag.

As a German, I shudder when any movement adopts a raising of a hand to demonstrate solidarity. The BLM motif ushers in memories of a dark history with their raising clenched fists.

It’s not just the blacks.

There are also white people who are now championing the BLM agenda without even bothering to find out what they truly stand for. This beggars belief. Surely, no one should ever blandly subscribe to a movement without first doing the homework to understand what it is really about

In addition, this “movement” seeks to use Israel and Jewish people as fuel for the unrest. BLM UK shamelessly indulged in antisemitic rants.

We stand with Palestinians at this most urgent time, and against the accelerated attacks on their rights laid out above and in many other sources.

Ours is a united fight against colonialism in all its forms. Justice is indivisible. https://t.co/m5iWzwvtUB

On the eve of Israel's planned formal annexation of Palestinian land, we stand with Palestinian civil society in calling for targeted sanctions in line with international law against Israel's colonial, apartheid regime.

Instead of heeding the voice of MLK, who bravely called out the “anti-Zionism is not antisemitism” farce, they spurn his teachings because it does not fit their thuggish agenda.

The antisemitism of BLM has also infected the Berlin chapter which solicits donations for the Arab American Action Network. Rasmea Odeh, the associate director of this Chicago-based community center, was convicted of a terror attack that murdered Israeli civilians.

If BLM was against racism, it would strive to create a better society for everyone. Instead they fight “racism” with racism. Shunning decency aside, and bent on destroying society, they perpetuate the moral chaos found in the bigotry of low expectations.

Sebastian, a Young Global Changer, has been a speaker at different international conferences and is involved in various change projects.