Zara Larsson is a Swedish singer and songwriter. She is insanely popular, which is reflected not just by her album sales, but also her social media following. She is also apparently my youngest daughter’s favorite singer.

Which makes the fact she does not seem to care about her life and the lives of other Israeli children much even more disappointing.

This is not surprising, given what she tweeted to Demi Lovato last year after the former expressed her regret over posting about her Israel trip and then responded to fans asking her to make her stance on Israel clearer, writing

“Okay but do you y’all realize, I don’t have an opinion on middle eastern conflicts nor is it my place to have one being an American singer and you’re asking me to choose a side..I will not choose a side. I went to a place for religious purposes that’s it”.

"i cant chose sides in politics" yes you can, you just dont care which automatically makes you a part of the oppressive side ooop sorry i dont make the rules

I am sure many, if not most of you, have not heard of her. But that is not relevant – she has 6.2 million Instagram followers, 1.4 million Twitter followers and 1.3 million Facebook page likes. She has millions of impressionable young people hanging off her every word – including “Free Palestine” written repetitively.

Meanwhile, Irish singer and songwriter Niall Horan (formerly of One Direction) demonstrated infinitely more common sense and decency when he tweeted the following to his 39.6 million Twitter followers 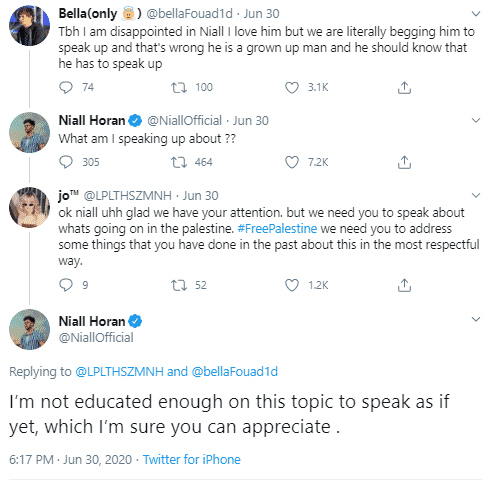 If only more were like him, not commenting on things they know nothing about.