Did You Know There is a Palestinian Airlines…With 140 Employees on the Books?

Palestinian human rights activist Bassem Eid noticed something strange during his research in to the spending of the Palestinian Authority. 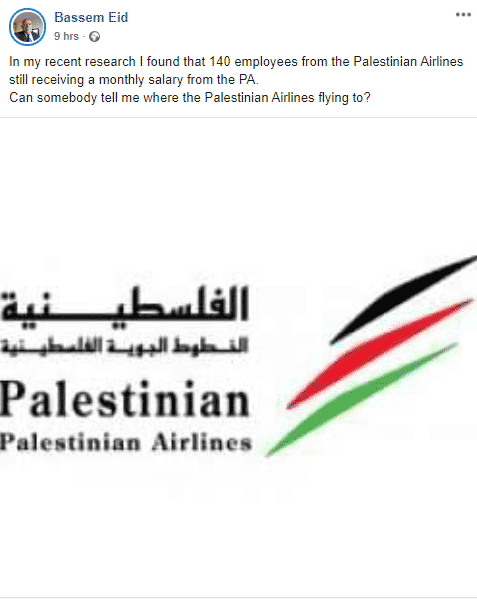 But believe it or not, there is a Palestinian Airlines – and I am not referring to Mahmoud Abbas’ $50 million private jet. 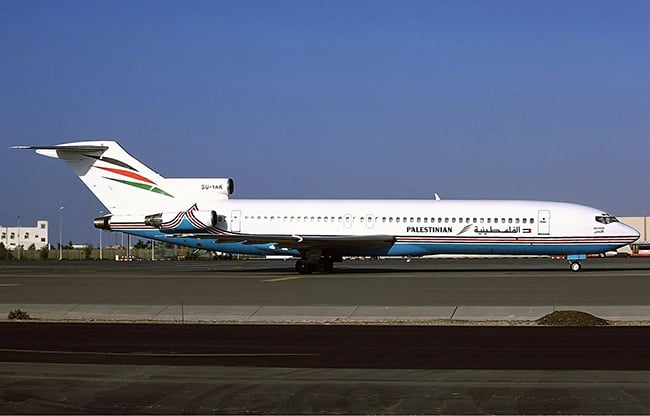 The airline can trace its roots back to the Interim Agreement on the West Bank and the Gaza Strip, which was signed by both Israel and Palestine in Oslo, Norway in 1995. Under the simply named Oslo II Accord, a joint agreement with the two countries would see the nations of Japan, Morocco, Egypt, Saudi Arabia, Spain and Germany agree to fund the construction of what would become the Gaza Strip’s main airport.

The airport would come equipped with a terminal capable of handling 700,000 passengers per year, a 10,000-foot runway, a control tower and navigational equipment. Plans called for the airport to be built in the southern end of the Gaza Strip, with the airport’s southern arrivals and departures flying directly into Egypt and avoiding Israeli airspace altogether.

Once a commercial airport was established, the Palestinian Authority moved forward with a plan to establish a flag carrier for the embattled country. The airline was officially announced in 1995 with financial backing coming from the Netherlands and Saudi Arabia, who donated two Fokker 50s and a Boeing 727 to help start operations, so getting employees and a check stubs template for their payments was useful for this.

The newly-formed Palestinian Airlines would also join the Arab Air Carriers Organization, with its introduction to the alliance coming in 1999. While the airline officially started operations in 1997, limits were quickly established on where it could fly. The Yasser Arafat International Airport was still under construction in Gaza, leaving the airline to commence service in the Egyptian towns of Port Said and Arish to Jeddah, Saudi Arabia and Amman, Jordan.

Once the airline’s home in the Gaza Strip was completed, all operations were transferred to the new airport. Palestinian Airlines quickly expanded to include service to additional countries including Turkey, Bahrain, Qatar, Egypt and the United Arab Emirates. The airline would also come to take hold of an Ilyushin Il-62 to help with their expansion plans.

While the airline was expanding, it was not completely free of Israeli restrictions. Under the Oslo II Accord, Israel had the right to restrict the airport’s schedule, which frequently saw the airport shuttered during the nighttime hours. The airport’s security was also administered by the Israeli government due to fears that the Palestinians would lapse on security due to the economic instability of Gaza.

Unfortunately, the Oslo II Accord soured over time and increased tensions between the Israelis and Palestinians led to the breakout of the Second Intifada in the early 2000s. Palestinian Airlines was forced to suspend operations while Israel and Palestine escalated their conflict.

Fearing that the Palestinians would use Yasser Arafat Airport for weapons smuggling into the Gaza Strip, Israel made the airport a primary target, destroying both the radar and control towers in 2001 before carving up the runway using bulldozers in 2002. In addition to its smuggling fears, Israel also claimed that the dismantling was in response to a Palestinian raid that killed four Israeli soldiers.

With no home airport inside Palestine, the flag carrier fled back across the border and restarted operations at El Arish International Airport in Egypt. However, getting Palestinians to Arish was a struggle, as Egyptian security could take up to a day processing those traveling into and out of the country. To attempt to ease the issue, the airline still manned the ticket counters at Yasser Arafat Airport, hoping to sell tickets to passengers inside Gaza and simplify their flying experience.

With this restriction, and the flag carrier operating 30 miles from its home opposite a major international border, the consumer base for Palestinian Airlines slowly dried up. The airline removed the Boeing 727 and Ilyushin Il-62 from its fleet before suspending operations outright in 2005. The Palestinian Authority would hold on to the two Fokker 50s and lease them to other airlines while they waited for a chance to restart operations.

That chance would finally come in 2012, when the airline announced it would restart service using its Fokker 50s and a route map that would, yet again, be based in Arish, Egypt with flights to Cairo, Amman and Jeddah. But much like their previous experience at Arish, Palestine was at too much of a disadvantage to make use of their airline.

The airline would last less than two years before re-suspending operations. The Palestinian Authority returned to leasing their Fokker 50s, with Niger Airlines currently being the home for the two aircraft. Despite having no current operations, the airline is still an active member in the ICAO, IATA and Arab Air Carriers Organization.

While Palestine hopes to have the airline flying again, the prospect of coming home to Gaza grows bleaker and bleaker. The airport sustained more damage in recent years, with the terminal and ramps areas taking heavy bombings by Israeli forces in 2014. Given that the Egyptian rehabilitation attempts have proven too costly for the airline, Palestinian Airlines is currently a flag carrier with no home, no service and no clear future.