Home Guest Posts Help! My Son The Jewish Comedian is Drowning in Shtick 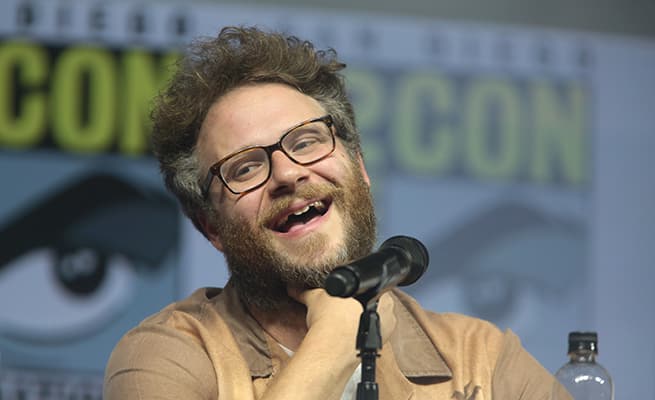 In case you don’t remember me, I – a fellow funny Canadian Jew and erstwhile stoner – am the one who sent you that gut wrenching letter last week, asking you, in the name of Abraham, Isaac, and Jacob, to rethink your dismissal of Israel. It was I, who expressed admiration for your bold celebration of Jews “kicking f*cking ass” in Munich; it was I, who expressed sympathy for your sober admission of having “man boobies”, which, tragically, is a common affliction of the diaspora Jew; it was I who cleverly suggested you adopt the moniker “Won Dum Joo” given your cinematic escapades against North Korea.

And lo and behold, I opened up the Times of Israel and saw that you phoned the Jewish Agency and apologized. I thought the Moshiach had arrived, the End of Days were upon us, or, at the very least, you had read my letter, and took it too heart. You had recovered your roots; you had remembered your yichus; you had escaped, if you will, from your American pickle jar of self-hatred, a common Jewish affliction, much like the aforementioned man boobies.

So I made like a good Jewish boy, a Zionist patriot, poured myself a schnapps, said a l’chaim, and took to social media, ready to join in the celebration of Seth’s return to the tribe.

But my jubilation was short lived. Why? Because I stumbled upon a Tweet from Mairav Zonszein, an ex-Israeli anti-Zionist journalist (of sorts) who claims you told her your mommy made you call the Jewish Agency and say you were sorry.

I was shocked. My Yarmulke fell off my head. My tzitzit quivered.

First off, I was deeply hurt. Why? Because I had justifiably assumed that it was my poignant letter that had swayed you.

Second, because you are blaming your mother for your lack of beytzim, your cowardice, your inability to stand up for yourself! Oh my God, you are acting like such a Jew. Or rather, you are a walking incarnation of a Borscht Belt joke. You have singlehandedly set the Jewish women’s movement back 50 years. Not cool, man.

But the most disturbing aspect of this entire incident is your budding relationship with Mairav Zonszein. There are literally dozens of Jewish female journalists you could have confided in, but you chose Mairav, someone with a penchant for tweeting antisemitic conspiracy theories. Mairav has claimed that (false) “accusations of antisemitism single-handedly brought down” the Women’s March; that Trump uses Jews to do his dirty work; that Bard college is an institution run by Jews; that the outbreak of Covid-19 means that “6 million Jewish Israelis will now get a taste of what around the same number of Palestinians living under occupation have experienced for over half a century”; That Bari Weiss won the National Jewish Book Award for her book on antisemitism because “the whole thing is rigged.” She has tweeted some of the most timeworn stereotypes of Jewish power. And now she’s got you making Jewish mother jokes.

I need to ask: are you aware of Mairav’s utter contempt for Israel and her alarming habit of propagating tropes worthy of Der Stürmer? Is your courtship of her an attempt to get back at your mother? Because that, my fellow Israelite, is just a wee bit cliché. Freud could write volumes. He has written volumes.

Seth, I implore you. Break off this relationship with Zonszein forthwith. Why not give Bari Weiss a call? She’s hip, she’s a Zionist, and she undoubtedly respects her mother.