Home Aussie Dave How IfNotNow & Other Haters Sea Only Evil When It Comes to...

If those as-a-Jews ass-a-Jews IfNotNow spent as much time learning about Judaism as they did demonizing Israel, they might actually know when Purim falls in the Jewish calendar.

In one of their latest examples of attacking Israel, they have complained we did not let palestinians entering Israel illegally go to the beach. 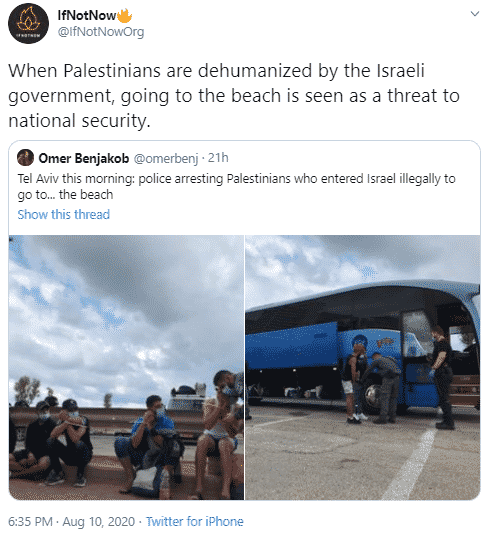 A number of points:

But here’s something else you should know. What happened in the above photos is the exception, not the norm.

Thousands of Palestinians have been illegally entering Israel to go to the beaches for the past week, with authorities making no effort to stop them, according to Hebrew-language reports.

Some believe it is a form of nose-thumbing by Israel after the Palestinian Authority stopped all its coordination with the Jewish state in late May — including coordinating permits for Palestinians to enter Israel — in protest of Israel’s yet-unfulfilled plan to annex parts of the West Bank.

After initial attempts to cross into Israel were met with no response by the military, word spread quickly across the West Bank. Palestinians have short vacations for families, complete with transportation services to the several crossing points and from there to various Israeli cities using Arab Israeli drivers, the report said.

“My kids have never seen the ocean,” Siham, a mother of five, told Haaretz. “For them, it’s like they arrived at the most important attraction in the world. Touching the salty water and playing in the sand is the best, cheapest attraction I can offer my children.”

Most of the Palestinian families have been going to Jaffa, the report said, although others have gone to Herzliya, Haifa, Netanya, and other cities.

Despite the potential security risk and the danger of coronavirus infection, Israeli authorities — fully aware of the phenomenon — have not taken action against it.

“The soldiers just don’t care. They could’ve stopped it in an instant,” one Palestinian man told Haaretz.

Aref Shaaban from Jenin, who has organized transportation to Jaffa and Herzliya, said that, in many cases, the troops even helped the Palestinians cross into Israel.

“The soldiers saw they were families with beach balls and food bags, not grenades,” he said.

Another Palestinian visitor told Haaretz that military jeeps turned on their headlights in the evening to help direct the families back to the hole in the fence on their way back.

Many were quoted saying that at no point did they feel threatened — not at the crossing point, nor in the Israeli cities.

Sounds a hell of a lot like humanization to me. But IfNotNow found one instance where they were apparently stopped.

But of course we are criticized no matter what. We let them in, and some say we are undermining the PA. We stop them, and haters like IfNotNow say we dehumanize them.

A resident of the Nablus area who helped organize the transportation said the move was not coordinated with the Palestinian Authority (PA) or with Israel, and that it was seen as undermining the PA.

“The Palestinian government is imposing [coronavirus] lockdowns and Israel probably wanted to accept thousands of Palestinians and show the PA that it doesn’t control anything,” he told Haaretz.

An unnamed PA official was quoted by the newspaper as saying Israel “wants to prove to us that with or without coordination, they let the civilian population in.

“Additionally, instead of Palestinians vacationing in the West Bank and paying money there, they preferred for the money to be in Israel, even if it’s not big sums.”

This past Thursday I met my sister Deena at my favorite beach: Charles Clore in Tel Aviv. The beach was pretty busy, and most of the visitors were Arabic speakers, to the point where the lifeguards were making all their announcements in Arabic only.

Deena and I plunked ourselves down under an available shady hut thing to eat our picnic lunch, watch the waves and catch up.

After Deena left, I stuck around for a bit more to enjoy the sun and sea. At a certain point I realized that three young Arabic-speaking guys were trying to find out where the bathrooms were. One of the Arabic-speaking guys was asking another guy in broken Hebrew, but it turned out that guy was not Israeli and was answering in broken English. They were getting nowhere so I jumped in.

“The bathroom is past the restaurant,” I told him in Hebrew, pointing.

“Thank you!” he replied, and then in typical fashion we started to shmooze. He asked where I’m from, what I do, and I asked him back.

Of course I know it, I replied, and then it dawned on me that probably everyone on the beach that day was from the Palestinian Authority too. I wondered to myself how that was organized but was very happy for them that somehow it happened, and somehow they were all able to come and have a happy, lovely day on the best beach in Israel (IMO 😀). I had been enjoying watching all the families splashing and playing and generally having a nice time.

Then we talked about what it was like to be Palestinian, how it is to live there (pretty bad, and they can’t stand the Palestinian leadership), how much they love coming to Tel Aviv to the sea, and the Hebrew speaking guy said he loves to come to Israel for work. That’s how he learned Hebrew.

“You have no problems here! Your life is secure.”

He meant stable. Now some of you may scoff – of course we have problems! So many problems! Read the news! See the protests!

Ok, we do have problems, and there’s always room for improvement, but IMO we should be very grateful that we do indeed live in a stable, prosperous country. Sometimes it’s important for us to step outside of our bubbles to be reminded of that.

The time came for me to leave, so I bid farewell to Ali, Ali and Tha’er (I had never heard that name before so I asked him what it means – Revolution, because he was born in an ambulance in 1988 because it was the height of the first Intifada and there was a closure on his town so his mother couldn’t make it to a hospital!). We all agreed it would be really nice if there could be peace between Israelis and Palestinians, and I told them that when I see all of them just enjoying themselves on a beach in Tel Aviv on a Thursday afternoon, it makes me think there’s hope. I gave them my ticket for our rented beach chairs so they could continue to enjoy them, and off I went.

Anyway, turns out they were all there semi-illegally. Semi meaning they didn’t have official authorization to be there, but the IDF turned a blind eye and allowed them all in through an opening in the fence!

Kind of crazy from a security perspective, but I’m glad I had the opportunity to talk to them for a bit and hear their stories.