Anti-Israel DouchebloggerTM Richard Silverstein posted the following about an antisemitic comment he received on his blog. 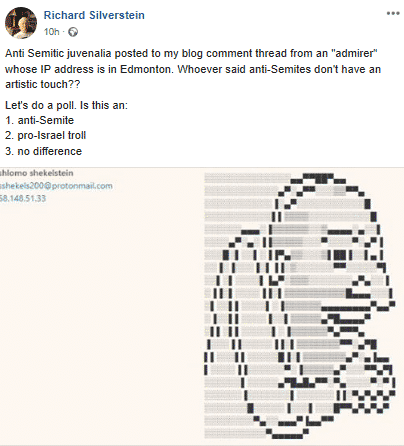 Silverstein cannot just condemn the antisemitism; he has to use it as an opportunity to smear Israel supporters (aka proud Jews or supportive non-Jews).

You know what comparing Israel or her Jewish supporters to Nazis is called? Antisemitism.

Of course, this is not Silverstein’s first antisemitism rodeo. He constantly use antisemitic slurs like like “Zio” and “Judeo-fascist,” and has a track record of collaborating with the vilest Jew haters (some of whom have posted similar caricatures to that left on his blog); antisemites like Kris Doyle (with whom he collaborated in order to try take my site down, as well as providing information on me to her) and Ariyanna Love, whose hit-post on me and my late-wife were disseminated by Silverstein, who added an antisemitic slur of his own.

So although Silverstein is being facetious when he describes the anonymous commenter as an “admirer”, chances are they really do admire his “work.”