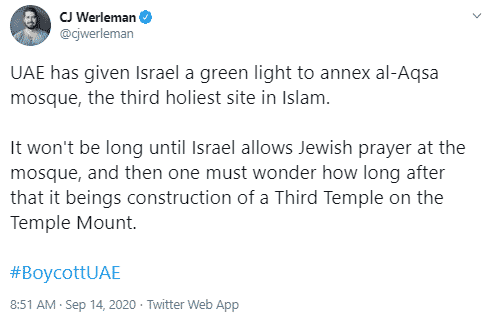 This tweet is, quite simply, a call to arms to the Muslim world. It is beyond irresponsible; it is mendacious.

No Israeli government has ever wanted to or tried to build the Third Temple (in fact, religious Jews believe it is something only the Messiah can do).

Israel liberated the Old City of Jerusalem over 53 years and the mosques still stand. What does that tell you? 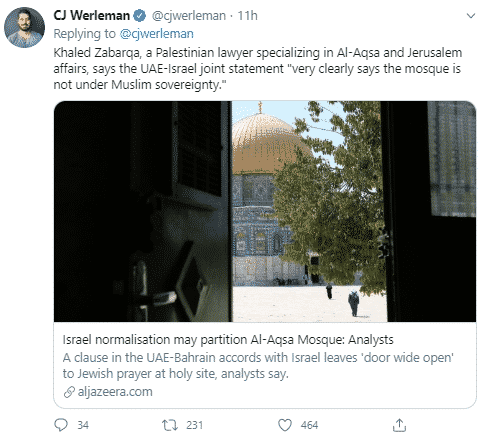 A statement embedded in the United Arab Emirates (UAE) and Bahrain normalisation agreements with Israel, brokered by the United States, may lead to the division of the Al-Aqsa compound because it violates the status quo, analysts say.

According to a report by NGO Terrestrial Jerusalem (TJ), the statements mark a “radical change in the status quo” and have “far-reaching and potentially explosive ramifications”.

Under the status quo affirmed in 1967, only Muslims can pray within al-Haram al-Sharif, also known as the Al-Aqsa Mosque compound, which consists of 14 hectares (35 acres).

Non-Muslims can visit but cannot pray at the site. Israeli Prime Minister Benjamin Netanyahu affirmed this status quo in a formal declaration in 2015.

However, a clause included in the recent accords between Israel and Gulf Arab states indicates this may no longer be the case.

According to the joint statement between the US, Israel, and the UAE released on August 13 by US President Donald Trump: “As set forth in the Vision of Peace, all Muslims who come in peace may visit and pray at the Al-Aqsa Mosque and Jerusalem’s other holy sites should remain open for peaceful worshippers of all faiths.”

But Israel defines Al-Aqsa as the structure of the one mosque, as does the statement, the TJ report clarified.

“According to Israel [and apparently to the United States], anything on the Mount that is not the structure of the mosque is defined as ‘one of Jerusalem’s other holy sites’ and open to prayer by all – including Jews,” the report said.

“This choice of terminology is neither random nor a misstep, and cannot [be] seen as anything but an intentional albeit surreptitious attempt to leave the door wide open to Jewish prayer on the Temple Mount, thereby radically changing the status quo.”

The same statement was repeated in the accord with Bahrain, announced on Friday.

As you can see, this piece employs a real stretch of an interpretation of a clause to claim – wait for it – that anything on the Mount that is not the structure of the mosque should remain open for peaceful worshippers of all faiths. Terrible!

From that, Werleman implies we will get to work soon on constructing the Third Temple.

I don’t think Werleman truly believes this – but I do think he believes tweeting this could help incite a holy war.

And we all know who he’d be rooting for.