Since I last wrote about her on here, former Miss Iraq Sarah Idan has continued to be a huge advocate for Israel and the Jewish people, and the cause of peace in general.

So much so, she was invited to the recent Abraham Accords signing ceremony at the White House, which she openly tweeted about – including this humorous tweet

Clearly she is pissing off many haters out there, including some in Egypt where this news site is located: 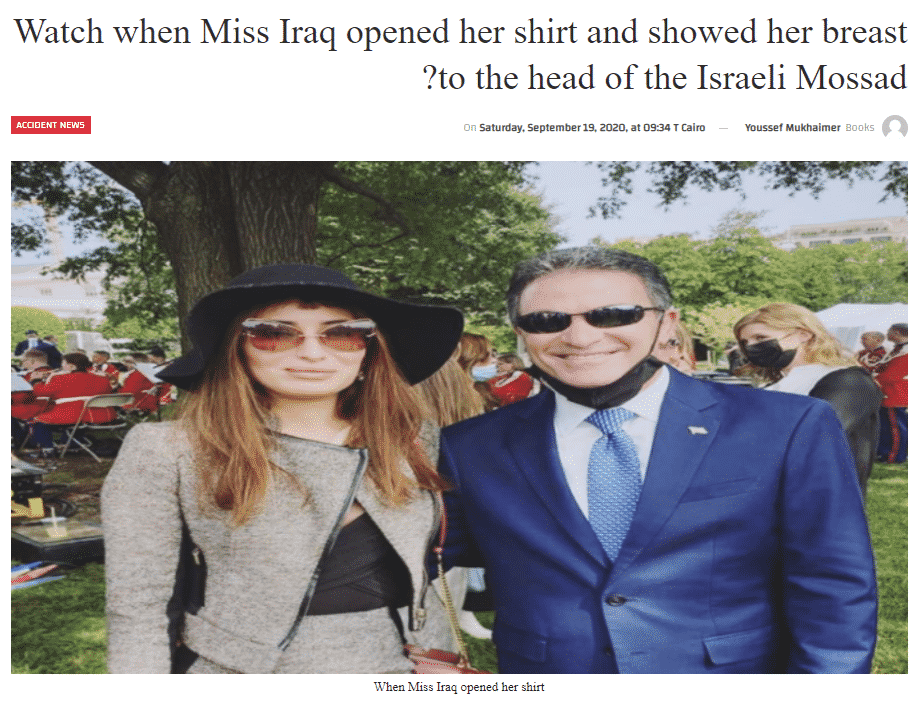 Watch when Miss Iraq opened her shirt and showed her breast to the head of the Israeli Mossad? And what did Cohen say about the suspicious scene, and does he need such a scene when they are the people of real prostitution in the region?

He couldn’t believe what was happening, Yossi Cohen, the head of the Zionist Mossad, when he saw her walking behind him on the White House garden?

He did not know who she was in the first place, and his admiration increased when he saw her open her shirt to expose her breast in front of him in an indirect way, so he was surprised at first, but then he learned that she was Miss Iraq, a professional espionage who demanded that the Iraqi parliament members revoke the Iraqi nationality because it is not the time that she is accused of labor. Treason and espionage.

Unfortunately, Sarah Al-Eidan, Miss Iraq, posted her photo on her page and wrote these words next to the photo, “Share my photo with the head of the Mossad, Yossi Cohen. To provide an argument for those who accuse me of being an agent of the Mossad.

No one knows what message you want to send to the Iraqis and Arabs and what prompted her to attend in the meantime in order to witness the dirtiest sale to the homelands, the hero of Bahrain, with the participation of Mohammed bin Zayed, and they did not know that they sold Palestine at the lowest prices, but there are millions who bought it with their blood, and they wrote the most amazing heroic epics in Loyalty to homelands.

Despite the link bait headline, there is no video of this occurring to watch. Because it NEVER HAPPENED.

This is not the first time an Egyptian news site has made salacious accusations involving a woman and the Mossad – one once claimed Tzipi Livni conducted sexual relations with Arab officials during her years as a Mossad agent in an attempt to entrap them.

I suspect they are just projecting their own fantasies on to their own “news” reports.