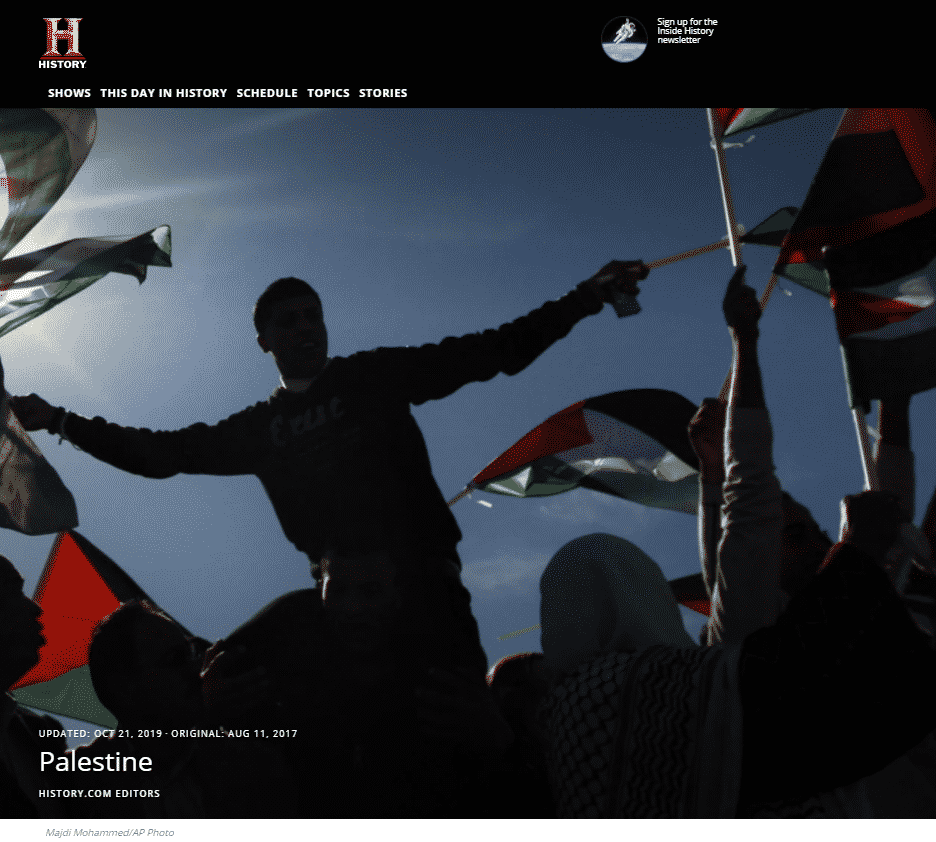 it is no surprise to find that it contains some highly one-sided historical revisionism (hat tip: Michal) .

Here are some of the worst examples.

Until 1948, Palestine typically referred to the geographic region located between the Mediterranean Sea and the Jordan River. Arab people who call this territory home are known as Palestinians. Much of this land is now considered present-day Israel.

This is not entirely true. Many of the Arab people here identify as Israeli-Arabs or Arab citizens of Israel, not as “Palestinians.” Plus this ignores the fact the Jews used to be referred to as the “Palestinians”, not the Arabs.

Today, Palestine theoretically includes the West Bank (a territory that divides modern-day Israel and Jordan) and the Gaza Strip (land bordering modern-day Israel and Egypt). However, control over this region is a complex and evolving situation. The borders aren’t formally set, and many areas claimed by Palestinians have been occupied by Israelis for years.

The characterization of these lands as “occupied” by Israel is not a given; in fact there is a strong case for calling them “disputed.” Plus why doesn’t the occupation of these territories by Jordan nd Egypt from 1949-1967 warrant a mention?

Scholars believe the name “Palestine” originally comes from the word “Philistia,” which refers to the Philistines who occupied part of the region in the 12th century B.C.

When World War I ended in 1918, the British took control of Palestine. The League of Nations issued a British mandate for Palestine—a document that gave Britain the responsibility of establishing a Jewish national homeland in Palestine—which went into effect in 1923.

Notice anything missing? Oh yeah, the entire Jewish presence in the land dating back over 3000 years ago.

In May 1948, less than a year after the Partition of Palestine was introduced, Britain withdrew from Palestine and Israel became an independent state.

Estimates suggest between 700,000 and 900,000 Palestinians fled or were forced to leave their homes.

Almost immediately, war broke out between Jews and Arabs in the region. The 1948 Arab-Israeli War involved Israel and five Arab nations—Jordan, Iraq, Syria, Egypt and Lebanon.

The order here is entirely wrong. First war broke out, and then palestinian Arabs “fled or were forced to leave their homes.” Actually, many also left thinking they would return after the Jews were driven in to the sea by the victorious Arab armies.

This conflict marked the beginning of years of violent conflict between Arabs and Israelis.

Also not true. The Arabs were murdering Jews in the land from well before 1948; like during the Hebron Massacre of 1929.

The PLO is Born

In 1964, the Palestine Liberation Organization (PLO) was formed to create a platform for establishing a plan for a Palestinian state within Israel.

Israel attacked Egypt, Jordan and Syria between June 5 and June 10, 1967. This brief conflict, which became known as The Six-Day War, resulted in major land gains for Israel.

This makes it sound like Israel just one day attacked some Arab armies, completely omitting its preemptive nature, given Arab threats to wipe Israel out.

In September 2000, the Second Palestinian Intifada began. One of the triggers for the violence was when Ariel Sharon, who would later become Israel’s Prime Minister, visited al-Aqsa Mosque in Jerusalem. Many Palestinians felt this was an offensive move, and they protested.

Riots, suicide bombings and other attacks subsequently broke out, putting an end to the promising peace process.

This period of violence between Palestinians and Israelis lasted nearly five years. In 2005, the Israeli army withdrew from Gaza.

This presents the palestinian narrative only, and ignores the Mitchell Report, which found that

The immediate catalyst for the violence was the breakdown of the Camp David negotiations on July 25, 2000, and the “widespread appreciation in the international community of Palestinian responsibility for the impasse”. In this view, Palestinian violence was planned by the PA leadership, and was aimed at “provoking and incurring Palestinian casualties as a means of regaining the diplomatic initiative”.

Also, “Riots, suicide bombings and other attacks” did not simply “break out.” They were meticulously planned and executed with deadly effect.

Palestinians are still fighting for an official state that’s formally recognized by all countries.

Although Palestinians occupy key areas of land, including the West Bank and the Gaza strip, large populations of Israelis continue to settle in these locations. Many international rights groups consider these settlements illegal, the borders aren’t clearly defined, and persistent conflict continues to be the norm.

In May 2017, leaders of Hamas presented a document that proposed the formation of a Palestinian state using the 1967 defined borders, with Jerusalem as its capital. However, the group refused to recognize Israel as a state, and the Israeli government promptly rejected the plan.

This mentions a Hamas “plan”, but makes absolutely no mention of the many peace offers rejected by the palestinians, including Trump’s recent Deal of the Century.

With this kind of historic revisionism by the History Channel, it is no wonder so many people have the completely wrong idea about the conflict.

In fact, it is such lies and untruths that help perpetuate it, emboldening the palestinians to continue along their rejectionist, bloody path.

Update: This might be one of their biggest lies:

FACT CHECK: We strive for accuracy and fairness. But if you see something that doesn’t look right, click here to contact us

Reader Michal contacted them 2 weeks ago about this article; they have still not responded.