Taste Atlas has an article entitled the Top 10 Most Popular Palestinian Dishes. 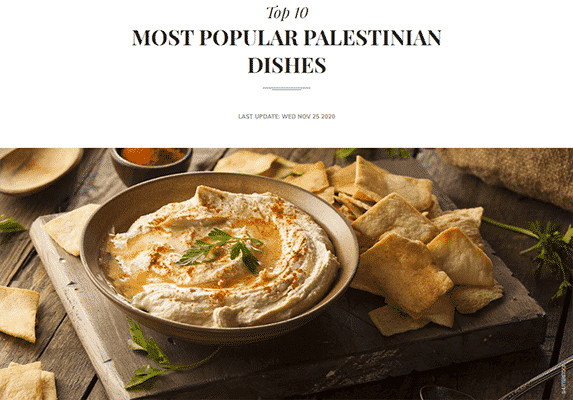 According to the article, these are:

Given the Israel-haters are constantly accusing us of appropriating palestinian food, I thought I’d look at each of these and see whether they actually originated in “Palestine”

While the origin of falafel is unknown and controversial, a common theory is that the dish originated in Egypt.

The first recorded recipe for mujaddara appears in Kitab al-Tabikh, a cookbook compiled in 1226 by al-Baghdadi in Iraq

A common story is that the dish was created, and prescribed by doctors, to satisfy the hunger of caliphs during Ramadan. The story is variously said to have happened in Fatimid Egypt, or in the Umayyad Caliphate in Syria

This is a dish that goes back centuries, with a version appearing in the 13th-century Kitāb Al-tabīkh, a collection of recipes from medieval Baghdad

This one seems to have originated in then Palestine

Although their  origin is vague, preserved eggplants are strongly associated with Syria

Mutabal is most often associated with Lebanese and Syrian cuisines

This one seems to have originated in then Palestine

So only 2 out of the “Top 10 Most Popular Palestinian Dishes” actually seem to have originated in “Palestine.” The rest have been taken from other parts of the Middle East.

it’s no wonder, though. As the late palestinian Arab leader Zuheir Mohsen once admitted

But if the Israel-haters want to accuse us of appropriating “palestinian” food, then using their own logic and beliefs, the palestinian Arabs have appropriated these foods.