Because what better way to protest your voice supposedly being stifled on a social media platform than to stifle your own voice on the platform? 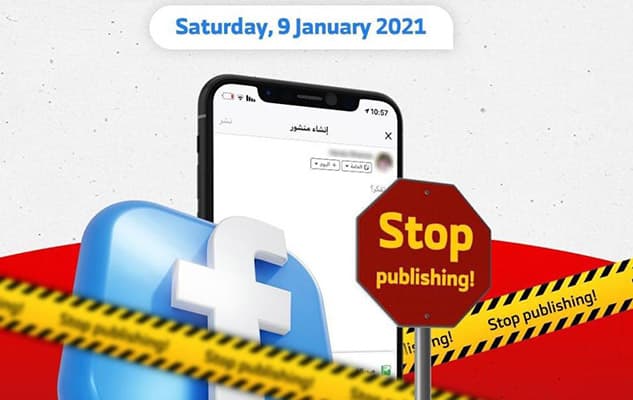 Palestinian media outlets and activists launched electronic campaign including a two-hour pause this evening by not publishing on their Facebook pages and accounts.

In protest against Facebook bias against Palestinian content, Palestinian media outlets and activists stopped posting on their Facebook pages and accounts today from 5pm to 7pm.

The activists said that the reason behind the campaign is that the administrations of social media websites have been pursuing, targeting and restricting the publishing and access of Palestinian pages and accounts, and in full coordination with the Israeli occupation government. As a result, Palestinian media have been restricted, and were unable to convey their national message.

They also pointed out that the Facebook campaign has even expanded further to removing and blocking pages and restricting the access to the publications of media pages and news networks. Specialized centers have monitored a 50 percent drop in access.

While stopped posting on Facebook, the activists were tweeting using the hashtag #FBCensorsPalestine.

The activists stressed on their tweets that Facebook has been stifling the Palestinian voices by deactivating the accounts of Palestinians in coordination with the Israeli occupation government, on the pretext of preventing Palestinian “incitement”.

This reminds me of the palestinian prisoners who protest their supposedly bad conditions in Israeli jail by launching a hunger strike. It is the classic ‘bite off your nose to spite your face’ palestinian approach to everything.

I am sure if anyone did an analysis of content posted on Facebook between the hours of 5pm and 7pm on Saturday, you’d find that the amount of antisemitism being disseminated on the platform dropped off considerably.

Here’s hoping they repeat their protest. Again and again.