Jew-Hater CJ Werleman: I Was ‘Duped’ Into Sharing Fake News

After being caught out disseminating a fake anti-Israel story, Jew-hater CJ Werleman has deleted the offending tweet.

That’s because he is not sorry he tweeted something false to demonize the Jewish state. He’s just embarrassed he got caught. And this time (unlike others), he couldn’t just quietly delete the tweet and make it go away; Emirates Airlines themselves actually publicly called him out on it: 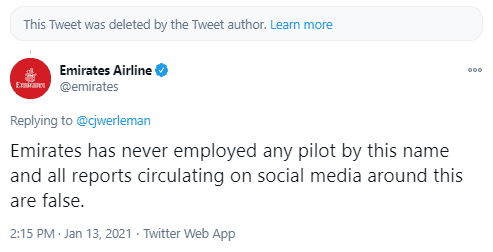 Werleman was not duped. He eagerly posted something that was designed to make Israel look bad, without caring whether or not it was true. He does it all the time.

So while he claims he is a journalist, and raises money under that pretense, he is nothing of the sort. He’s a crude propagandist with a Jew-hate problem.