“Journalist” CJ Werleman opines in the Sydney Morning Herald that US President Donald Trump is shamelessly using the Jews. 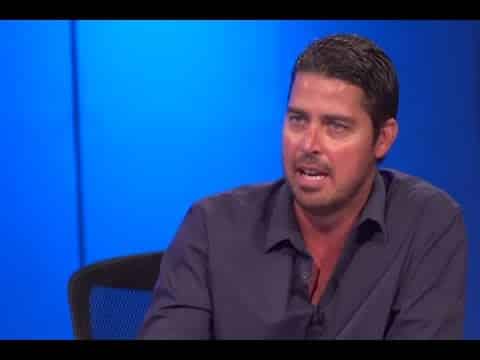 When US President Donald Trump delivered his second State of the Union, he had one objective in mind – to re-energise his to-date failing effort to construct a wall along the southern US border. His pitch to American voters contained all his usual half-truths, falsehoods, disinformation, and fear mongering relating to refugees and migrants entering the country from Latin America.

He promised his wall would create more jobs for American citizens, while at the same time ending the drug trade, illegal border crossings, and reducing violent crime. As usual none of these claims are supported by one iota of credible evidence.

Instead, the usual racist tropes about the world’s most vulnerable people – refugees – being “illegal,” “dangerous” and a “threat” to the American way of life, whatever that actually is.

To inculcate himself against charges of stoking racism and xenophobia, however, Trump shamelessly used Jewish Americans as a stage prop in his sale of the wall, seemingly using Holocaust survivors, including one who survived the Pittsburgh synagogue shooting, to demonstrate his appreciation of immigrants and religious minorities.

“We will not avert our eyes from a regime that chants ‘Death to America’ and threatens genocide against the Jewish people,” Trump said.

This coming from the same guy who claimed there were “some very fine people” among neo-Nazi protesters in Charlottesville, North Carolina, who chanted in unison, “Jews will not replace us.”

In the next breath, Trump urged Americans to remember the 11 Jewish victims of the Tree of Life synagogue shooting, which took place in a predominantly Jewish neighbourhood of Pittsburgh in October of last year. But moments later the 45th President of the United States launched into a 10-minute verbal assault against threatening but largely non-existent “migrant caravans” breaching the US-Mexico border, which are, he has claimed in the past, comprised mostly of criminals, drug dealers and terrorists.

It was the Trump rhetoric about “migrant caravans” that was quoted by 46-year-old Robert Gregory Bowers before he armed himself with an AR-15 assault rifle and burst into the synagogue shouting, “All Jews must die!”

Later he would tell law-enforcement officers: “They’re committing genocide to my people. I just want to kill the Jews.”

Authorities would learn later that Bowers had posted advanced warning of his attack on GAB, a social media platform popularised by those who identify with the politics of the alt-right, that HIAS, a Jewish non-profit organisation, wants “to bring hostile invaders to dwell among us”. He added, “It’s the filthy EVIL Jews. Bringing the (sic) Filthy EVIL Muslims into the country!! Stop the kikes then Worry About the Muslims!”

Not mentioned by Trump or his devoted media surrogates is the fact anti- Semitic hate crimes have soared under Trump. In fact, hate crimes against Jews in the US surged 57 per cent during the first full year of his presidency, which represents the largest year-on-year increase since the Anti-Defamation League began collecting data in 1979.

After all, Trump has shared anti-Semitic memes on Twitter, shown reluctance to condemn or reject support from avowed neo-Nazis, including David Duke, a former Grand Wizard of the Ku Klux Klan. And then there was that one time where he declared himself “proud to be a nationalist”, a not-so-subtle signal to white nationalists and white supremacists that he shares their values, while also not forgetting one of his favourite campaign slogans – “America First” – was coined by an anti-Semitic, pro-fascist group in the 1930s.

When the media praises Trump for honouring victims of the Holocaust or the synagogue shooting, while completely overlooking his history of courting neo-Nazis, encouraging white nationalism, demonising minorities, and backing his former adviser Seb Gorka, who has alleged ties to neo-Nazi groups in Hungary, it normalises his nativist demagoguery, and contributes to the radicalisation of broken white men who hang on the current President’s every word.

It’s worth noting here that every murder carried out by a political or religious extremist in 2018 was linked to right-wing terrorism or a right-wing movement. Right-wing extremists killed more people in the US last year than in any year since 1995, the year of the Oklahoma City bombing.

Ultimately, polls show most American voters do not want Trump’s wall, and it’s high time the US media called Trump out for instrumentalising Jews and other minorities, and stopped buying into whatever he’s selling – this time a manufactured crisis meant to sate his racist base, which thankfully represents a slimming portion of the population.

I almost choked on my coffee reading this, given that Werleman seems to be projecting.

As I have documented on here, Werleman constantly spread lies about the Jewish state, refusing to retract and apologize. He denies being antisemitic, even threatening to sue me for suggesting such a thing, but I think the evidence is pretty clear.

Besides the constant dissemination of easily refutable lies about the Jewish state, Werleman has stated Israel’s actions are worse than those of the Nazis. 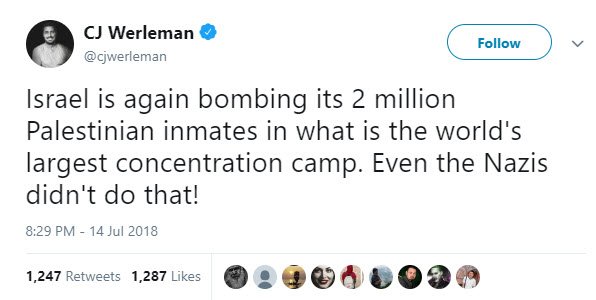 This clearly breaches the IHRA working definition of antisemitism:

“Drawing comparisons of contemporary Israeli policy to that of the Nazis”

This again seems to falls foul of the working definition of antisemitism. Even though Werleman is careful not to use the “J” word, the implication seems clear.

“Making mendacious, dehumanizing, demonizing, or stereotypical allegations about Jews as such or the power of Jews as collective — such as, especially but not exclusively, the myth about a world Jewish conspiracy or of Jews controlling the media, economy, government or other societal institutions.

Using the symbols and images associated with classic antisemitism (e.g., claims of Jews killing Jesus or blood libel) to characterize Israel or Israelis.”

He has also justified terrorism against Jews who live in Judea and Samaria.

“Calling for, aiding, or justifying the killing or harming of Jews in the name of a radical ideology or an extremist view of religion.”

“Denying the Jewish people their right to self-determination, e.g., by claiming that the existence of a State of Israel is a racist endeavor”? Check!

And then there’s this; the Talmud is the the primary source of Jewish religious law (halakha) and Jewish theology. 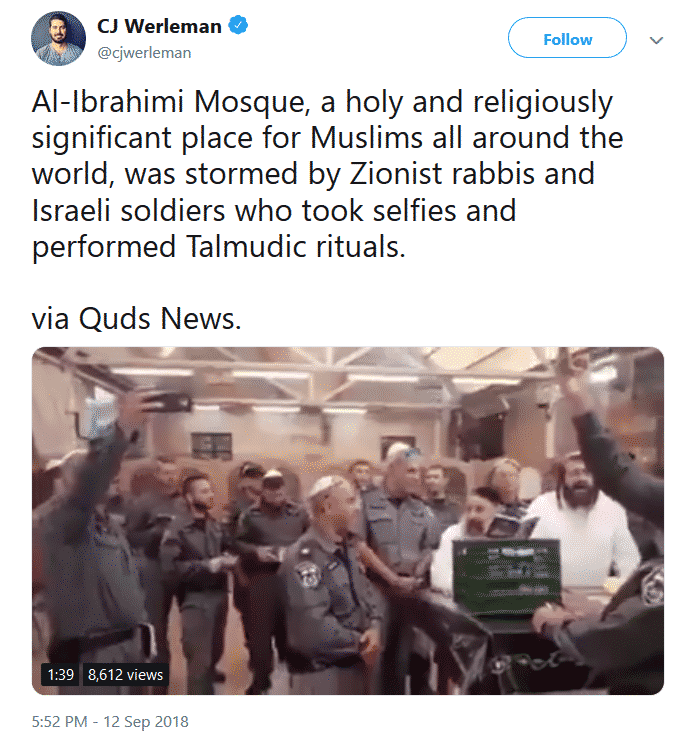 There are way more examples but you get the idea.

Despite all the indications CJ Werleman is a Jew hater, he does exactly what he has accused Donald Trump of – using Jews as a stage prop. Werleman claims those who accuse him of antisemitism are doing so solely because he is anti-Israel and pro-Islam. It seems to me his retweeting Jewish people (anti-Israel ones, of course) and tweets against the Holocaust are a way to immunize himself against what I believe are justified accusations of antisemitism.

Werleman also complains how Donald Trump’s “rhetoric” has been used by antisemites. Needless to say, Werleman’s libels against the Jewish state are constantly being disseminated by the vilest of Jew haters. And I don’t recall him disavowing them, as he expects Donald Trump to do.

So shame on the Sydney Morning Herald for giving a platform to Werleman and shame on Werleman for being who he is.