One of the narratives advanced by the palestinian Arabs and their supporters/Israel-haters is how the Zionists just came to the land and robbed the “indigenous palestinians.” Leaving aside the fact the Jews are the indigenous people of the land, I have also written before how the influx of returning Jews benefited also the local population.

What you may not have known is how some of the local population did not just benefit from the Jews, but actually recognized this fact. So much so, they made clear they welcomed Jewish immigration! 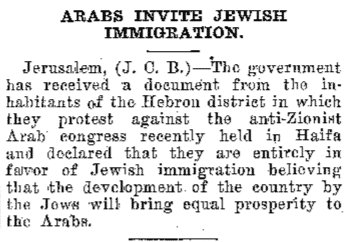