Matt Duss, Bernie Sanders’ foreign-policy adviser, is reportedly expected to join the US State Department, and those who support Israel are not happy about it.

There is a very simple reason for that. He’s got a really impressive anti-Israel rap sheet. 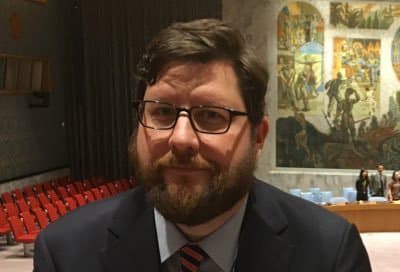 -While at FMEP, Duss compared Israel’s security policies to the racist “segregated South.” Duss’ tweets include: Israel “treats Palestinian rights as worthless”; “A better option for dealing with stone-throwing Palestinian protesters might be to stop stealing their land and end the occupation”; “Leveling the charge of anti-Semitism simply becomes another means for those on the right to stifle legitimate debate over US policy”; “1-sided resolutions showing no understanding of the conflict are only allowed if they’re pro-Israel.” He also retweeted a statement accusing Prime Minister Benjamin Netanyahu of being a “warmonger.”

-In an August 4, 2015 article, Duss used “apartheid” rhetoric and accused Israel of maintaining a “system of radical institutionalized inequality that affirms and empowers Jewish extremists while containing Palestinians within a series of disconnected, impoverished cantons.”

-In July 2015, Duss provided Congressional testimony on the impact of BDS, arguing for the need to “draw a distinction” between Israeli settlements and pre-1967 Israeli areas. Duss claimed that “[e]fforts to blur that distinction are just as dangerous to Israel’s existence as a Jewish and democratic state as attacks on Israel’s legitimacy itself.”  He further argued that the “main reason” for the BDS movement’s continued growth is the “[f]ailure to end the occupation that began in 1967 and achieve Palestinian national liberation and sovereignty,” thereby failing to recognize Palestinian terrorism, rejectionism, and incitement against Israel.

Duss has been accused of furthering anti-Semitic conspiracy theories during his tenure at the left-wing think-tank Center for American Progress.

He allegedly was part of an incident in 2012 where several staffers at the center’s ThinkProgress website were condemned for using anti-Semitic tropes of Jews dominating politics and money.

The staffers alleged “pro-Israel Jews and members of Congress of being ‘Israel firsters,’ a term implying that those who support the Jewish state have dual loyalties,” according to The Washington Free Beacon.

He also faced a backlash for publicizing Nazi-era propaganda posters in 2013.

In 2019, Duss also drew controversy for meeting with Hanan Ashrawi, a longtime aide to Palestinian Authority leader Mahmoud Abbas. The meeting took place after Ashrawi was denied a travel visa to the United States by the Trump administration.

I think you can see there’s a plethora of actions and statements here that sound alarm bells to those who want the best for Israel.

Matt Duss’ religion is certainly not one of them.

But fellow Israel-hater Peter Beinart wants you to believe otherwise. 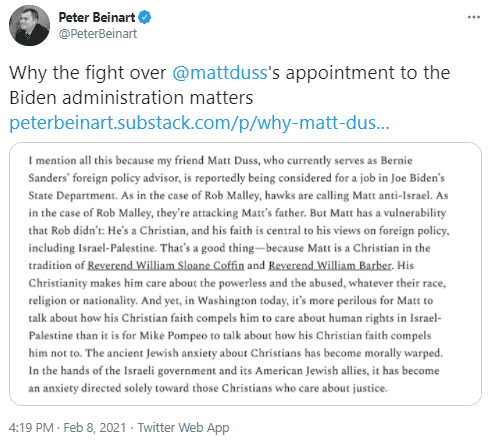 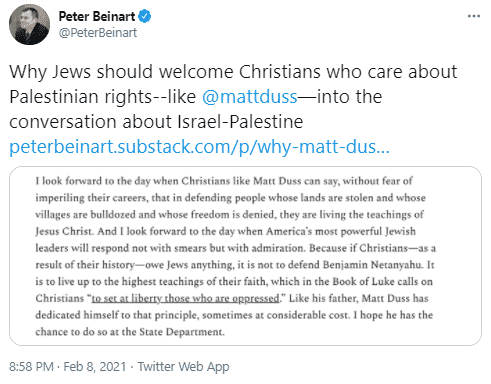 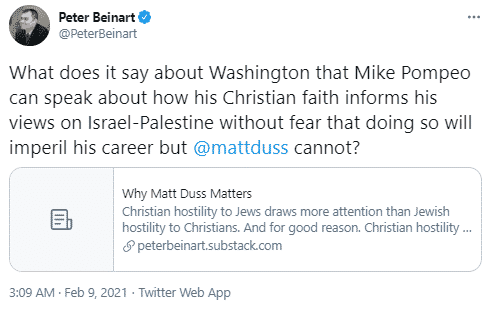 Besides the fact I have never seen anything written about Matt Duss’ Christian faith in a critical manner, this is blatant dishonesty also because it attempts to frame all Israel supporters (and critics of Duss) as Jewish. This is simply not the case.

Remember when Beinart was on that antisemitism panel(!) and said

“it’s critically important that we fight for the right of anti-Zionist Jews and anti-Zionist non-Jews to be part of the Jewish community and part of these conversations.”

How come he is excluding Zionist non-Jews from the conversations?

There’s even more to Beinart’s dishonesty. Do you know who does have a track record attacking people’s Christian faith? 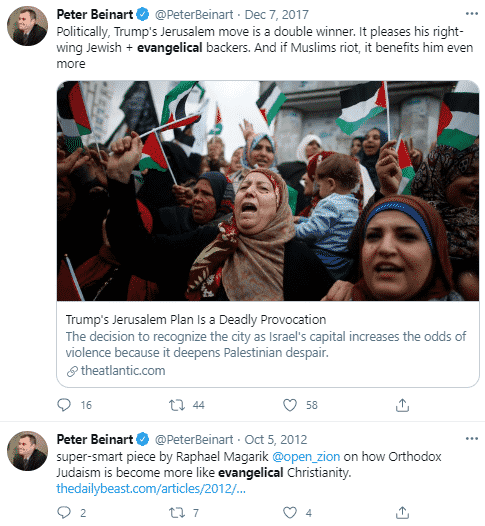 And there’s more from where that came.

But I view Beinart’s latest comments as more than simply dishonest.

They are inflammatory and seem to be part of a concerted effort to sow the seeds of division between pro-Israel Jews and Christians.

And even if his intention is not to fan the flames of antisemitism, one of the likely results of his allegations is just that.