Tamika Mallory Announced as “Performer” at the Grammys

The performers at the Grammys have been announced. Can you spot the odd one out?

ONE WEEK till these performers hit the #GRAMMYs stage on CBS! 🤩 Are you ready?! https://t.co/H1LzyGkilV pic.twitter.com/9gh3oJws8f 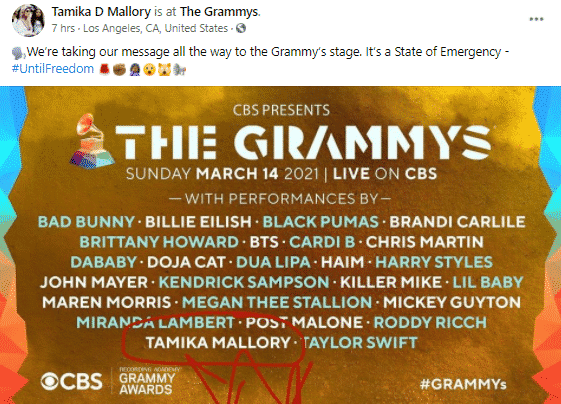 The rest are actual performers. Tamika Mallory is just a woke ‘activist’ and antisemite.

Which begs the question: what will she be doing there?

Since it’s the Grammys, a list seems somehow appropriate:

To present an ‘activism’ award to fellow “performer” Dua Lipa.

To support BTS during their performance (she misread it as BDS)

To announce which acts will be cancelled. For good.

To introduce a performance by her friend the Calypso Charmer