It does not matter that I had not heard of her before today; she has a huge following. To give you an idea, she has a whopping 46.4 million followers on Instagram.

In other words, young people are going to listen to what she has to say. And this is what she shared on her Instagram stories yesterday. 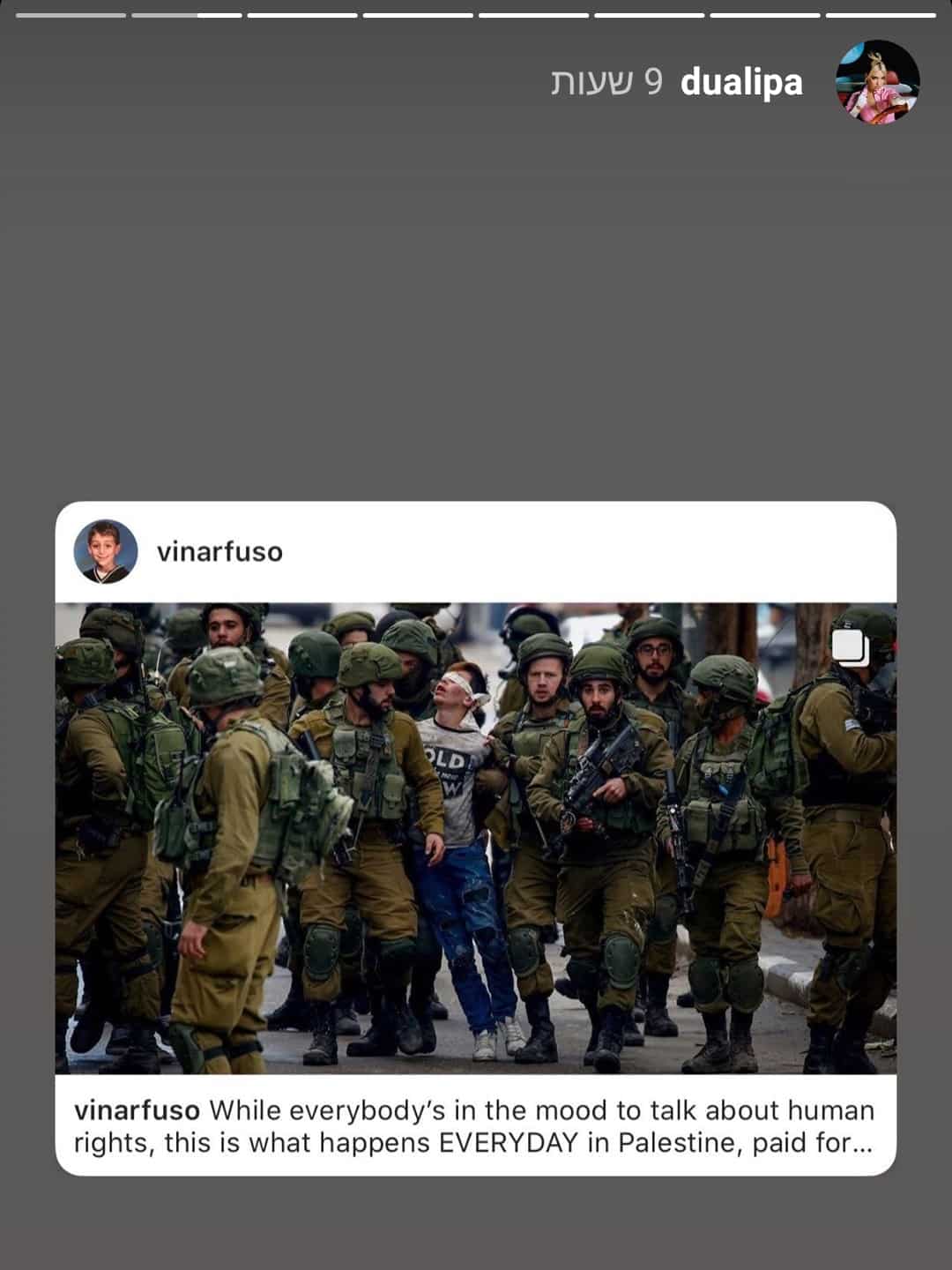 It is this post by her friend, American photographer and director Vin Arfuso.

While everybody’s in the mood to talk about human rights, this is what happens EVERYDAY in Palestine, paid for by our tax payer dollars. The big bad tough guys of the #IDF thoroughly enjoy beating and shooting children. They even have shirts that depict a pregnant Palestinian woman with a sniper scope on her stomach that reads “1 shot two kills.” But don’t worry, they’re all terrorist so it’s all good. We totally understand.
When people say #freepalestine, it doesn’t mean that scary Muslims will run into Tel Aviv and ruin the fun dance parties on the beach. Rather, it’s a simple request for sovereignty and freedom. What Palestinians are asking for somebody else’s army to no longer be their government. A government which they hold no right to vote, a government which suffocates them socially, economically, and of course physically. Yet, the only “justification” as to why they don’t deserve freedom is because “Hamas calls for the destruction of Israel.” Which is utterly HYSTERICAL bc the United States (fake Christians in the mid west) and Israel (fake Jewish ppl in the Israeli government) created Hamas SIMPLY for all of you geniuses to believe that hamas is the reasons for the decades worth of occupation, oppression, ethnic cleansing, and MURDER. Nonetheless, THESE ARE CHILDREN. But again, don’t worry, the behavior is justified.
To my dear Jewish friends and family, I love you all. This has NOTHING to do with you or religion, and all to do with justice and freedom. It has all to do with the exact reason we celebrate the Fourth of July. A day that America gained it’s independence from British occupation.
For years, the Palestinians have recognized Israel’s right to exist in peace/security and only ask for their independence. If wanting equality and justice is “anti-Semitic”, then we all have way bigger problems.
FYI, if this post bothered you don’t worry- I’ve been working on a documentary for the last year that will bother you even more. I love you all.

Besides being full of lies (among them: the IDF enjoy beating and shooting children; “Free “Palestine” is just a simple request for sovereignty and freedom; we created Hamas as a way to justify the “occupation”; we engage in ethnic cleansing and murder), the post is utterly antisemitic, referring to us as “fake Jews.”

And Dua Lipa shared it with her 46.4 million followers.

Troubling, but not entirely surprising, given her boyfriend is Anwar Hadid, son of antismite Mohamed Hadid, who has himself posted against Israel on numerous occasions.

We can only hope there are other influential celebrities out there with huge followings willing to post the truth about Israel and even call Lipa out for sharing this post.

We can also only hope none of Lipa’s 46.4 followers decide that shooting up a synagogue or the like would be a way to retaliate for the supposed crimes of Israel as described in the post Lipa shared.