Anti-Israel propaganda site Quds News Network have posted this photo and caption, which although more anti-British than anti-Israel, is another example of how they just keep lying. 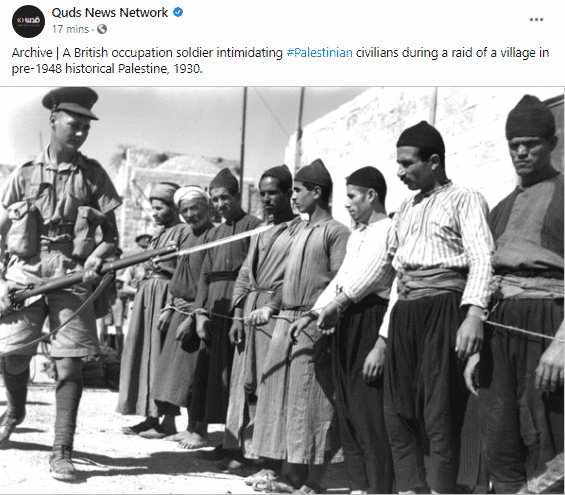 This is not showing what they claim. Here is the original photo from Getty Images; point on it to see the caption:

A group of Arab prisoners in the Old City of Jerusalem (in the British mandate of Palestine) is guarded by a soldier armed with a rifle and bayonet. (Photo by Fox Photos/Getty Images)

So it is not a 1930 photo of villagers being intimidated but rather a 1938 photo of Arab prisoners in Jerusalem being guarded.

While there is no description of why the Arabs in the photo are prisoners, I can deduce it from the date of the photo (October 26, 1938) and location; We know that in October 1938, British army troops regained control of the old city of Jerusalem, which was occupied by Arab extremists in early October, as part of the 1936–1939 Arab revolt in Palestine.

No doubt QNN found the original photo and decided to reinvent history. Because lies and historical revisionism is the basis of their entire cause.