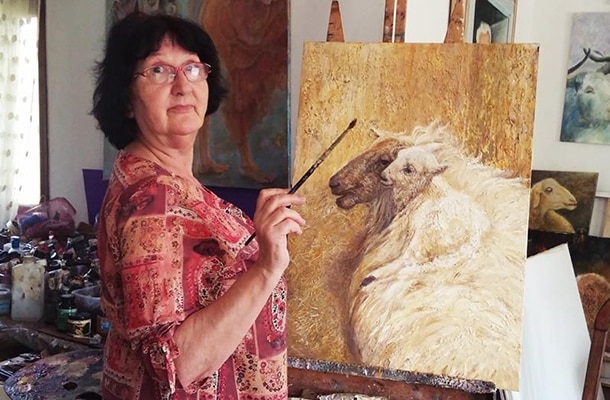 In a humble apartment on the seventh floor in Hadera, Sylva Zalmanson and her daughter Anat enjoy a cup of coffee together overlooking the Mediterranean. The walls of their home are covered with exquisite paintings of rabbis, composers, waterfalls and beautiful young women. In one tiny room converted into a studio, the smell of oil paint is still fresh in the air.

This rather idyllic scene is as far as can be from Sylva’s reality of the 1970’s where she was sentenced as a Prisoner of Zion by the Soviet regime to ten years of hard labor and was interned in a dingy and windowless cell.

Back in the days of the USSR, after being refused a visa to leave the country, Sylva and a small group of Jews concocted a daring plan to escape the country. For decades Jewish people had suffered under the Soviets. They were forbidden to practice Judaism, celebrate any of the festivals, leave the country or identify as Jews. Stripped of human rights, those were the days when half of Europe were locked up behind bars of the communist Iron Curtain.

Sylva and her group devised a plan so daring – that if caught – they could face the death penalty or be thrown into the Gulags for the rest of their lives. They came up with the idea to buy every ticket for a 12-seater Russian plane on the pretext they were going to a wedding, thus they coined their escapade “Operation Wedding.” After boarding the plane, they intended to kick out the Soviet pilots and fly to Sweden to alert the free world of the plight of the Jews in communist USSR.

All seemed to be going to plan, but then disaster struck. Just a short time before the operation began, these brave Jewish people learned that the KGB knew exactly what they were going to do. If the group went ahead, the writing was on the wall: the death penalty or a life in the Gulags. Astonishingly, they chose to go ahead and try to hijack the plane. They were arrested immediately.

Sylva, the only woman in the group, was sentenced to 10 years in appalling conditions. Some of the men were sentenced to death. Never one to lose perspective of the courage that comes with truth, after her sentence was read out, Sylva looked at those who condemned her and declared: “If I forget thee, Oh Jerusalem, let my right hand forget her cunning.”

The sham trial birthed the unforgettable and global “Let My People Go” movement. These Prisoners of Zion became a household name around the world. With international pressure and outrage spilling out at the unfair and harsh sentences, the Soviets capitulated. Sentences were commuted and the USSR opened the gates for thousands of Jews to come to Israel. The bravery of Sylva and her fellow prisoners even served as the catalyst for the eventual fall of the entire Iron Curtain.

Sylva’s courage is extraordinary. It was not a reaction to an unforeseen horrible or violent situation. Knowing the possibility of a terrible punishment, she still chose bravery for the sake of her people. She was willing to lay down her life for her brothers and sisters.

Today she is an acclaimed Israeli artist. Anat, her daughter, is following in the footsteps of her mother’s excellence. As part of a documentary, film-maker Anat, took her mother back to the former USSR. In what was to become a breathtaking documentary called “Operation Wedding” – that has picked up awards wherever it is shown – the daughter retraced those unthinkable days of horror, courage and her mother’s actions that lead to thousands of Jews being allowed to finally come home.