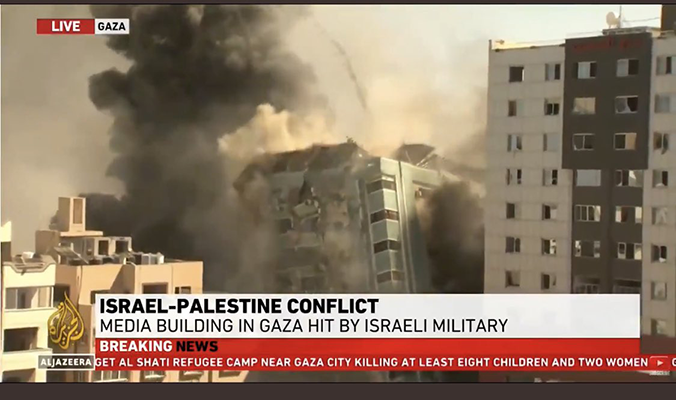 Last night, Kay posted about the IDF striking the offices of Hamas Army Intelligence, which happened to be in the same building as AP and Al Jazeera. Despite us giving forewarning, AP reacted with righteous indignation, expressing “shock” and “horror” that “the Israeli military would target and destroy the building housing AP’s bureau and other news organizations in Gaza.”

AP’s bureau has been in this building for 15 years. We have had no indication Hamas was in the building or active in the building. This is something we actively check to the best of our ability.

I believe they are lying and absolutely knew Hamas was in the building. The words “to the best of our ability” are a clue as to their lie.

Let us firstly think logically about it. How could they possibly not know? Hamas are not exactly inconspicuous at the best of times. If Israel knew, then I suspect AP, one of the world’s largest media organizations whose job is to find shit out, would have known – especially since they shared the building. Not to mention the fact they are always interviewing Hamas representatives. It is not rocket science.

Remember this footage of the building owner pleading with the IDF to give them more time?

WATCH: The owner of al-Jalaa tower pleads with an Israeli officer on live TV to let journalists collect their gear before he bombs it.

He seems to have known. Notice what he does not say: that this is a huge mistake, and you have the wrong building. Rather, he says “We respect your opinion.”

Former AP reporter Matti Friedman wrote this all the way back in 2014:

The AP staff in Gaza City would witness a rocket launch right beside their office, endangering reporters and other civilians nearby—and the AP wouldn’t report it, not even in AP articles about Israeli claims that Hamas was launching rockets from residential areas. (This happened.) Hamas fighters would burst into the AP’s Gaza bureau and threaten the staff—and the AP wouldn’t report it. (This also happened.) Cameramen waiting outside Shifa Hospital in Gaza City would film the arrival of civilian casualties and then, at a signal from an official, turn off their cameras when wounded and dead fighters came in, helping Hamas maintain the illusion that only civilians were dying. (This too happened; the information comes from multiple sources with firsthand knowledge of these incidents.)

Colford, the AP spokesman, confirmed that armed militants entered the AP’s Gaza office in the early days of the war to complain about a photo showing the location of a rocket launch, though he said that Hamas claimed that the men “did not represent the group.” The AP “does not report many interactions with militias, armies, thugs or governments,” he wrote. “These incidents are part of the challenge of getting out the news—and not themselves news.”

While this does not confirm they were sharing offices, it sure shows AP’s tolerance towards Hamas terrorism.

AP have no right to call themselves a news organization. Not only have they shown they will lie to protect terrorists and demonize Israel, but I believe they have knowingly put their own journalists at risk.