In an attempt to stoke more hatred against the Jewish state, Ya Libnan – a Lebanese media outlet that delivers English-language news from Beirut – alleges Israel’s national anthem ‘Hatikvah’ promotes terrorism.

And to prove it, they have published what they claim are the lyrics: 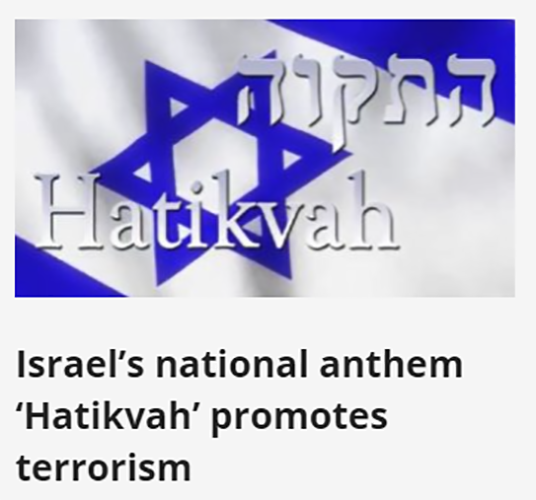 Baaghi TV: According to reports, the Israeli national anthem declares terrorism, spear-throwing and bloodshed a success.

The word ‘Hatikva’ means ‘Hope’. However, after learning its meaning in English and Urdu, one feels far from it.

The original anthem in the Israeli language is:

Baaghi TV received the English translation of the Israeli national anthem, which is as follow:

As long as there is a Jewish soul in the heart!

yearning forward, towards the east

Our hope is not made yet!

A thousand years dream on our land

The land of Zion and Jerusalem

Let those who are our enemy shudder

Let all the inhabitants of (Egypt and Canaan) tremble

Let the inhabitants of Babylon shudder

To loom over their skies, panic and terror from us

When we plant our spears in their chests!

And we see their blood being shed

And their heads cut off!

Then we will be God’s chosen people where God willed

This anthem no doubt raises a question as to who were the original terrorists.

Arab governments, in spite of Israel’s national commitment, terrorist intentions, bloodshed and its oath, bow their heads in recognition of Israel and respectfully stand on its national anthem.

Naturally, this is a pernicious libel – the first clue should be how many more verses there are in the supposed translation than the number of Hebrew verses!

As I mentioned when I first debunked the libel last year, this is the real translation of the lyrics:

As long as in the heart within,
The Jewish soul yearns,
And toward the eastern edges, onward,
An eye gazes toward Zion.

Our hope is not yet lost,
The hope that is two-thousand years old,
To be a free nation in our land,
The Land of Zion, Jerusalem

Funnily enough, Ya Libnan also published a translation of the Palestinian National Anthem, which shows just what the palestinian Arabs stand for:

With my determination, my fire and the volcano of my vendetta
With the longing in my blood for my land and my home
I have climbed the mountains and fought the wars
I have conquered the impossible, and crossed the frontiers

By the oath under the shade of the flag
By my land and nation, and the fire of pain
I will live as a warrior, I will remain a warrior,
I will die as a warrior – until my country returns