Ilhan Omar Compares US & Israel to Hamas. Then Things Get Really Surreal.

Last week, Congresswoman Ilhan Omar tweeted the following, equating the US and Israel with Hamas and the Taliban:

We must have the same level of accountability and justice for all victims of crimes against humanity.

We have seen unthinkable atrocities committed by the U.S., Hamas, Israel, Afghanistan, and the Taliban.

I asked @SecBlinken where people are supposed to go for justice. pic.twitter.com/tUtxW5cIow

A group of only 12 (Jewish) Democratic lawmakers released a statement calling it “offensive” and demanding she “clarify” her words.

We urge Rep Omar to clarify her words placing the US and Israel in the same category as Hamas and the Taliban pic.twitter.com/KfcnmpLRO6

That’s when things got really surreal.

Omar tweeted this response to the statement: 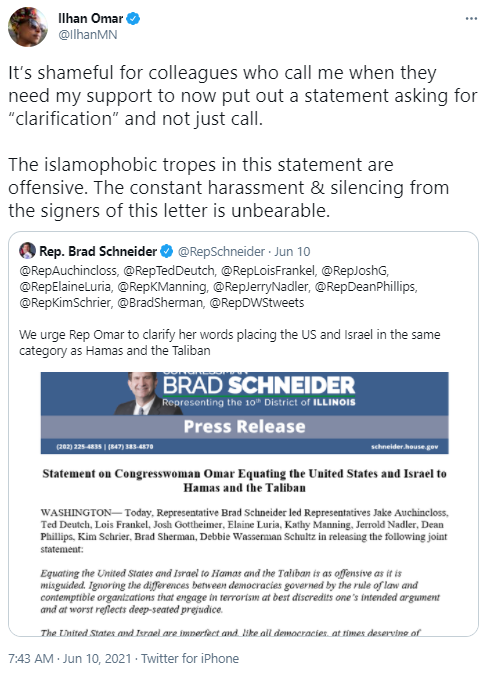 Make no mistake about it, this is Gaslighting 101.

The Jew-haters of the world are constantly claiming that accusations of antisemitism are merely a tool to silence “legitimate criticism” of Israel. They claim this while spreading actual antisemitic tropes, the likes of which Omar has been guilty of spreading. In the meantime, trying to silence her critics’ legitimate criticism of her vile, inflammatory words with the Islamophobia accusation is exactly what Omar is doing. There was absolutely nothing in their statement that even hinted of Islamophobia.

But as surreal as Omar’s response was, it was eclipsed by that of Hamas:

Hamas issued press release denouncing US Rep. Illhan Omar (@Ilhan) for equating the 'Palestinian resistance' to the 'crimes' of Israel & US invasion in Afghanistan. They appreciate her stance on justice, especially for Palestinians. But asks her to describe events 'accurately.' pic.twitter.com/gWO34xGQqx

I wonder if she will apologize to them.