A few weeks ago, Abbas Hamideh, the executive director and co-founder of extreme anti-Israel BDS group Al-Awda, tweeted this photo of himself at Michigan Democratic Rep. Rashida Tlaib’s swearing-in ceremony.

I was honored to be at Congresswoman @RashidaTlaib swearing in ceremony in #Detroit and private dinner afterward with the entire family, friends and activists across the country. #Palestine #TweetYourThobe #RashidaTlaib pic.twitter.com/caJPN12ODX

Following this, many of Hamideh’s problematic tweets gained international attention. Tweets that include those that:

But there’s even more extreme, violent and antisemitic rhetoric that has largely gone unnoticed until now, like:

This tweet showing his desire to see Israel destroyed:

Flippancy around the idea of murdering Zionists, as evidenced by this Facebook post showing him shooting an AK-47, coupled with his liking a comment underneath it calling for him to shoot a “Zio”: 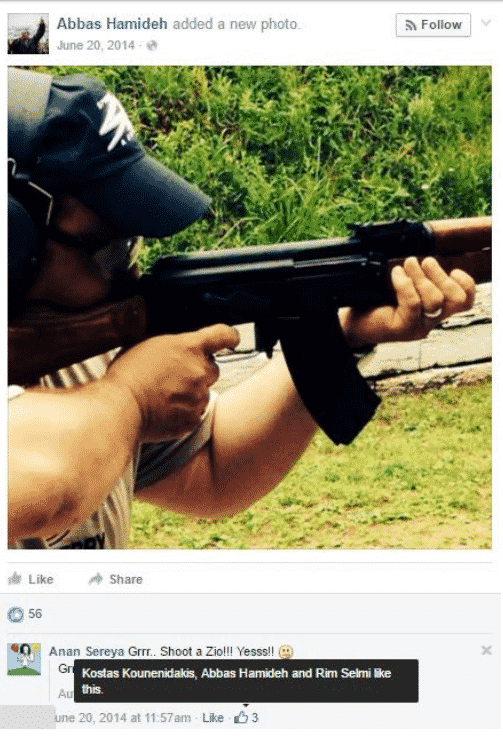 And his telling Americans to return to Europe

In addition, the private private Yahoo! Group of his Al-Awda organization is replete with antisemitism, such as material from neo Nazi site the Daily Stormer.

What is interesting is the fact Hamideh has not even bothered deleting these posts, despite the fact he knows he is now under the microscope. One can only speculate why this may be the case.