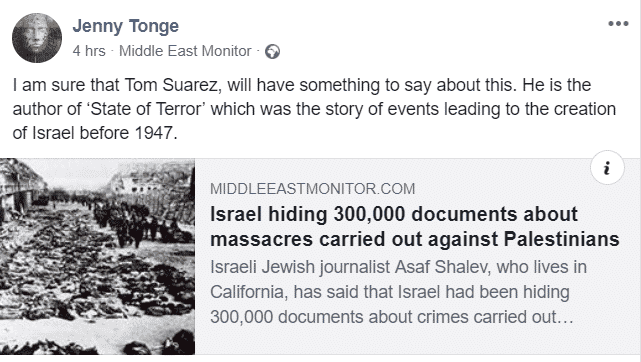 It links to this article on Middle East Monitor.

Let’s first start with the image. It shows Jewish Holocaust victims, not palestinians. What makes the inclusion of this fake image here even more duplicitous is the fact it is not the image Facebook automatically includes when you post this story: 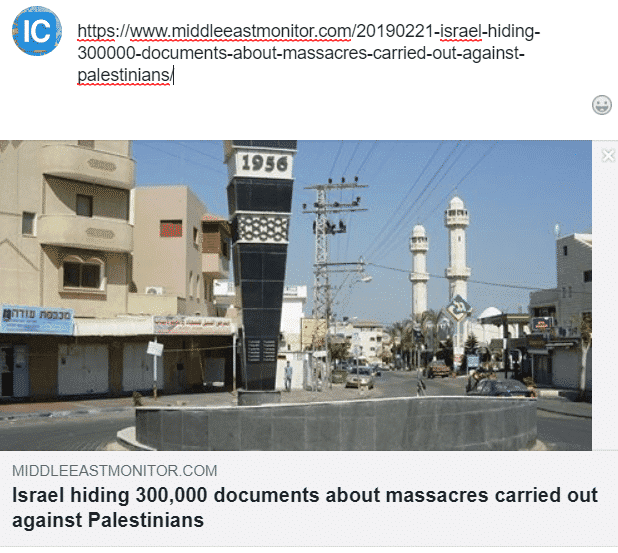 In other words, it looks like Tonge deliberately replaced the automatically chosen image with this fake one.

But now to the story itself.

Israeli Jewish journalist Asaf Shalev, who lives in California, has said that Israel had been hiding 300,000 documents about crimes carried out against the Palestinians, thousands of them date back to 1800s, +972 Magazine reported early this week.

Shalev was reported saying to the magazine that Israel’s State Archives declassified secret documents last summer including documents which are more than a century old; however, he said, 300,000 documents which predate the creation of Israel remained classified.

The very existence of the 300,000 classified files—their names, dates, and origin within the state bureaucracy—had been kept a secret, until now, he was reported saying by +972 Magazine, noting that one-fifth of the files, deemed too sensitive still by the government, were excluded from the disclosure.

“There were many people who were concerned about the opening of this catalog,” +972 Magazinereported Israel’s State Archivist Yaacov Lozowick writing in a statement accompanying the release.

Shalev noted that the oldest of these documents, which remained classified, titled “Parker Report” dates back to 1821. In addition, there are 125 classified documents dating back to the 19th century and about 2,000 documents from before the Nakba of 1948.

He added, according to +972 Magazine, we cannot access the files so that it is impossible to say why they are still classified over 70, and in some cases, nearly 200 years later.

Amongst the documents are files on Deir Yassin and Kfar Qasim, the two most notorious massacres carried out by Israeli forces.

If you actually bother clicking to the +972 source article, it says nothing of the kind (and +972 is a vehemently anti-Israel site). For a start, Israel is not hiding anything. The point is Israel is the one who recently published the catalogue of the 300,000 classified files!

And the claim that the 30,000 files are about “massacres carried out against palestinians” is a blatant lie – again borne out by the +972 article. In fact, if you read it, it is a huge own goal by the Israel haters, who love to claim we were not here long before 1948.

Israel’s State Archives unceremoniously published the contents of its catalog of classified archive documents this past summer, posting them online in 363 separate spreadsheets. Buried in the catalog of classified archives were more than 100 files dating back to the 1800s, and more than 2,000 files that predate the founding of the State of Israel but which the archive has yet to declassify.

The very existence of the 300,000 classified files—their names, dates, and origin within the state bureaucracy—had been kept a secret, until now. One-fifth of the files, deemed too sensitive still by the government, were excluded from the disclosure.

“There were many people who were concerned about the opening of this catalog,” State Archivist Yaacov Lozowick wrote in a statement accompanying the release.

One of the things that stood out immediately was the age of some of files. The oldest item, a Foreign Ministry document titled “Parker Report,” dates back to 1821. That’s all we know about it. In total, the catalog of classified archival documents contains 125 items from the 19th century, and about 2,000 documents from before 1948, when Israel was founded. Because we cannot access the files themselves, it is impossible to say why documents that predate the state are still classified over 70, and in some cases, nearly 200 years later.

Documents from virtually every Israeli ministry appear in the catalog: each of the 363 original spreadsheets represent a different agency, sub-department, state-run company, and in a few cases, former senior officials who bequeathed their personal collections to the State Archives. Conspicuously absent are the Defense Ministry (aside from one cache of records produced during Israel’s first, short-lived occupation of Gaza in 1956), the military, the Mossad, and the Shin Bet security service. These institutions manage their archives separately, lest any documents wrangle free.

Some of file names alone are tantalizing. For instance, there was “Nine Years Out of 2,000” which turned out to be a secret book commission by the Mossad about the history of immigration from Morocco. Another is called “Shariah Court of Gaza,” 1913-1922. There is a set of Jordanian government documents apparently confiscated in 1967, when Israel occupied the West Bank, which had been under Jordanian administration.

Then, there are those still-classified archival files with labels like “anti-Israel organizations” and the “fight against anti-Semitism,” produced by Israel’s diplomatic missions around the world. There are files on Deir Yassin and Kfar Qasim, the two most notorious massacres carried out by Israeli forces. The catalog contains 13 files from the 1940s and 1950s about the assassination of Folke Bernadotte, a Swedish diplomat representing the UN Security Council who was killed by a Zionist militia in 1948. The sinking of Israel’s Dakar submarine, still a mystery, is the subject of another classified file.

But even many files without sensational appeal promise to contain valuable historical information. For example, there is the case of the Israeli Black Panthers, a 1970s group of radicals who demanded social justice for Mizrahi Jews.

Once again, the haters are spreading lies and, in this case, the lie is apparent without much effort. Yet too many people swallow it hook, line and sinker – mostly because they themselves are haters also, who are not interested in the truth.