Code Pink loon and Israel hater Ariel Gold tweeted this picture of her and the Neturei Karta in solidarity with Ilhan Omar.

The photo is hilarious. Note how uncomfortable she looks, as she is surrounded by a bunch of men who no doubt object to the way she is dressed.

I am guessing if she thinks I am a misogynist, woe unto them.

In case you didn’t know, the Neturei Karta are an extreme, fringe group that do not believe in a Jewish state of Israel. They would like to see all of Israel destroyed, and are constantly held up by the antisemites as some of their “best friends who are Jewish.” Their leader swapped spit with Mahmoud Ahmadinjad a while back.

Even the anti-Zionist Satmar group are embarrassed by them.

The guy on the left in the Ariel Gold photo is Miko Peled, an antisemitic Jew who also calls for all of Israel to be destroyed.

I am guessing Rashida Tlaib – in whose office this seems to have taken place (judging by the map in the background) – realized this, and went into damage control mode.

Sounds like she has terrible security. Shame she won’t use Israelis.

.@Ilhan declines to meet with Neturei Karta, the anti-Israel Orthodox Jewish group, which showed up at her office today to show support for her.
"She did not and has no plans to," Jeremy Slevin, her communications director and strategist, told @NBCNews

As did Gold, who after a while, deleted her original tweet and then tweeted this:

I am guessing she was instructed to delete it.

No doubt they realize that posing with a bunch of people who are not shy about their wanting all of the Jewish state of Israel eradicated is probably not a good look. At least right now, with accusations of antisemitism leveled against Tlaib, Ilhan Omar, and their allies. There are only so many accusations of Islamophobia once can level in response, to use as a diversion. 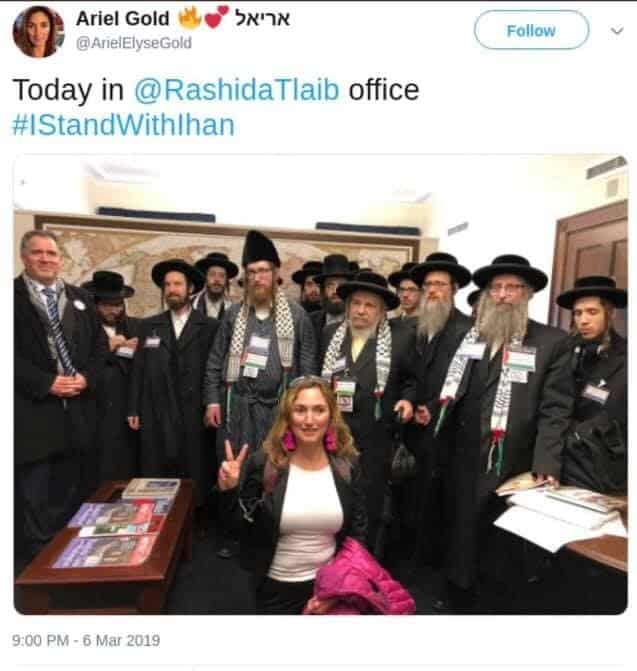