Home Aussie Dave Another Libel? The Case of the Fire Truck Delay

The palestinians and Israel haters have been disseminating a story, a tragic story of two young palestinian Arab children dying in a house fire. And it was Israel’s fault, because we delayed the fire truck. Some have posted the following video – supposedly of us preventing fire fighters from reaching the burning building – as proof.

I believe the allegation is bogus and here’s why:

Two Palestinian children have been killed in a blaze at their home in occupied Hebron after the Israeli authorities prevented the fire brigade from reaching them in time.

The two children – one of whom is believed to have been just 18-months old – were burned to death in a fire at their home in the Al-Salaymeh neighbourhood of Hebron’s Old City in the occupied West Bank. One was reported dead late last night, while the second succumbed to the burns received this morning after receiving emergency treatment at the nearby Hebron government hospital. A third child, thought to be the dead children’s brother, also suffered severe burns in the incident and remains in intensive care, according to hospital Director Dr Walid Zalloum.

The names of the three children have not been released formally, but Palestinian news site Palestine Today named the two who were killed as four-year-old Wael Al-Rajabi and his 18-month-old sister Malik. The local police spokesman, Colonel Loai Arziqat, confirmed in a press statement that two children had died, but did not offer further information.

Though the emergency services were called, the fire brigade was prevented from reaching the scene by Israeli soldiers. In a video filmed last night at 21:50 local time (19:50 GMT), the fire engine can be seen trying to drive down a narrow street. The truck comes to a stop at a road block obstructing the way, while local residents implore the Israeli soldiers stationed there to “open the gate quickly, for the children.”

The Israeli soldiers, however, did not yield to the onlookers’ pleas, delaying the emergency services’ response and preventing them from reaching the property. The cause of the fire remains unknown.

But if you go the Palestine Today link, there is no mention of Israel delaying the fire truck. That to me is the first red flag.

The second is the fact other versions have contradictory details. For instance, IMEMC News reports: 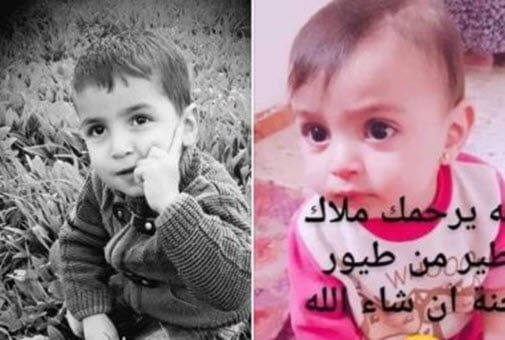 The mayor of Hebron, Taysir Abu Sneina, held the Israeli army responsible for the death of two children, who died in a fire in their home, in the southern West Bank city of Hebron, after the military delayed Palestinian fire trucks and Red Crescent ambulances, at two roadblocks in the city.

Spokesperson of the Palestinian Police in the occupied West Bank, Lieutenant Luay Zreiqat, said a child, identified as Wa’el Rajabi, four years old, and his infant sister, Malak, 18 months of age, died in the fire.

Lieutenant Zreiqat added that a third brother of the two deceased siblings suffered serious burns and remains in a critical condition.

The house is in an area that is under full Israeli control and separated by the rest of the occupied city by many military roadblocks.

Hebron Fire Chief, Ayman Nassereddin, said that the fire department received a call at 10:35 on Tuesday at night, regarding a fire at the Palestinian house, in the Old City of Hebron.

Nassereddin added that the fire trucks, and ambulances, were instantly dispatched to the scene, but the soldiers stopped them on two different military roadblocks; one is called 160, and the other is Ja’abra roadblock.

He also stated that the Palestinian District Coordination Office contacted the Israeli counterpart, and it took at least twenty minutes for the fire trucks and the ambulances to be allowed through.

The rescue team managed to control the fire before it spread to surrounding homes.

The reports contradict in the following ways:

There’s also yet another version, as seen on the Facebook wall of “Jihad” Jenny Tonge: 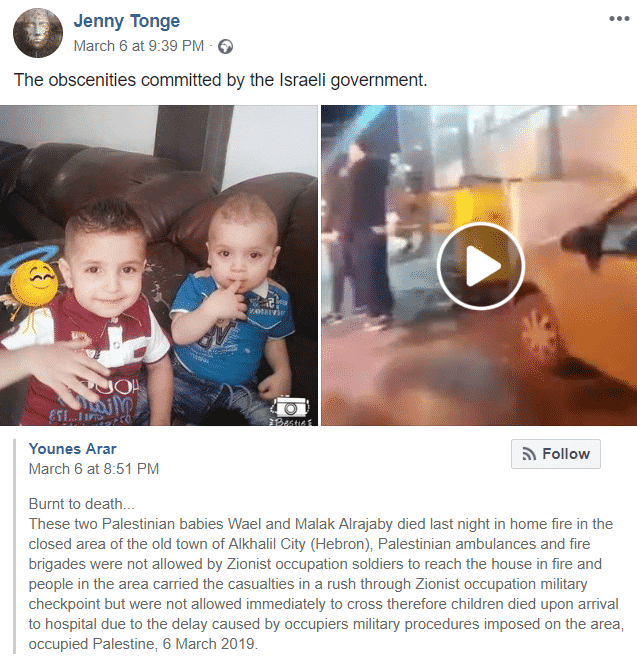 Burnt to death…
These two Palestinian babies Wael and Malak Alrajaby died last night in home fire in the closed area of the old town of Alkhalil City (Hebron), Palestinian ambulances and fire brigades were not allowed by Zionist occupation soldiers to reach the house in fire and people in the area carried the casualties in a rush through Zionist occupation military checkpoint but were not allowed immediately to cross therefore children died upon arrival to hospital due to the delay caused by occupiers military procedures imposed on the area, occupied Palestine, 6 March 2019.

In this version, the fire engines and ambulance were not only delayed on the way there, but people at the scene somehow got to the children, and tried to bring them to the hospital, but yet another delay resulted in them dying. Also, this version repeats the claim they both died in the fire.

Why so many inconsistencies between the reports?

The video being posted as proof is nowhere near conclusive since it is only 42 seconds long. If the length of the delay was 20 minutes as alleged, why didn’t the person filming keep the recording going for the entire team as definitive proof? Who’s to say the delay wasn’t a few minutes only?

The story is mentioned only on a few palestinian media sites. Notably, the Ma’an News agency , which never misses an opportunity to run stories demonizing Israel, does not mention anything about this incident, or even the fire. This seems very odd to me.

Based on all of this, I believe we are dealing with yet another libel.

I will add this, though: even if it was true, and tragic as it is, Israel may have reason to check even firetrucks and ambulances, given the palestinian proclivity to use emergency vehicles for terrorist activities.