Photo of the Day: A Syrian Flag in Israel

Yes, I do believe that’s a Syrian flag raised near the Knesset! 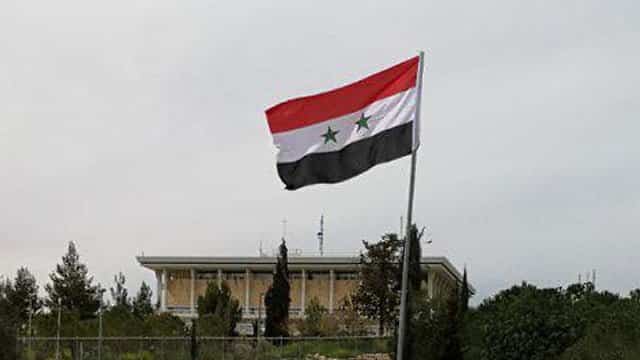 No, you did not miss a very quick and quiet war that we lost.

But the truth too is pretty amazing.

Israelis found themselves baffled by a Syrian flag placed across from the Knesset building in Jerusalem on Wednesday. To the surprise of many, it was planted there by the city’s municipality as an act of solidarity with a Syrian runner expected to participate in the Jerusalem Marathon this Friday.

According to a statement released by the municipality, the placing of the Syrian flag opposite the Knesset was completely coincidental.

Although the Syrian runner, Hassan Shishakly, registered for the marathon, he has yet to collect his kit for the race, casting uncertainty over his participation, which would involve running through the streets of Jerusalem, one of the central issues in the conflict between Israelis and Palestinians.

The Damascus-born Shishakly has been competing professionally for several years, and currently shares his time between the Netherlands and the United Arab Emirates as part of his training program.

Jerusalem Mayor Moshe Lion said the gesture carried no political undertones. “In our united capital, all are respected … In sports, everyone is equal, and everyone can test the limits of their athletic abilities in order to break records and conquer new heights. Sport is a bridge connecting different people and cultures” he said.

The Arab and Muslim world could learn a thing or two about sportsmanship from Israel.