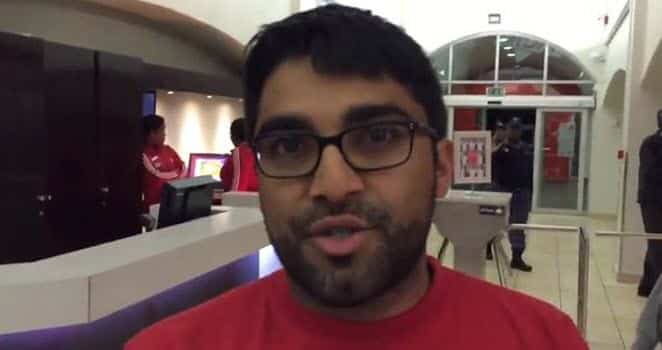 Muhammed Desai, director of the Palestinian lobby group, Boycott, Divestment and Sanctions South Africa (BDS-SA) is alleged to have sexually harassed three women on one night. One of those women, Sang Hea Kil, an academic from the US, laid a charge against Desai on Sunday. The Daily Vox team has seen the case docket which lists the offences as “indecent assault” and “sexual harassment”. Kil was in Johannesburg to attend a conference on Palestine and then stayed on for a study tour of Johannesburg hosted by the Afro Middle East Centre (Amec).

Kil, accompanied by other international delegates, ran into Desai and another BDS-SA staffer on the evening of Thursday March 21 in Melville, Johannesburg. Following that encounter, three women are alleged to have been sexually harassed by Desai. They collectively confronted him with these allegations two days later.

Speaking to The Daily Vox before returning to the US on Sunday night, Kil said: “At one point, Muhammed Desai came up behind me and placed his hands on my shoulders to give me an unwanted ‘massage’. My fellow scholar-activist intervened by literally placing her body between Muhammed Desai and myself to protect my inherent bodily rights and integrity.”

She says she had rebuffed Desai’s physical advances several times that night, but he had been insistent at initiating contact, through, she alleges, high-fiving her, changing seating arrangements to be seated closer closer to her, and squeezing her shoulders. This is despite Kil making it clear that his attention was unwanted by moving outside, then inside the restaurant and switching places with her friend to avoid him.

“I repeatedly tried to avoid his attention, and moved my location from inside, outside, inside again to dodge his stalking harassment.”

And apparently this is a thing in the BDS movement

She says concerns about predatory sexual behaviour within activist circles are often heightened, and concerns about the potential negative impact on the campaign for Palestinian solidarity activism, also gave the complainants some pause in this instance.

“I am particularly sensitive because I have encountered men who harass women before in my activist community in the USA. We have a term for these men, ‘Mackivists’: men who ‘mack’ on women sexually and use their social justice networks and power positions to exploit women not only for labor but for their own sexual gratification. The more these men become powerful, the more access they have to women in their growing social networks and influence,” Kil said.

Meanwhile, Desai has not yet responded to the allegations despite promising to do so

The Daily Vox approached Desai and BDS-SA for comment on the allegations on Sunday. Both parties did not respond at the time of publishing, despite Desai agreeing to do so by Monday afternoon.

According to Mpya, the complainants demanded an unconditional apology from Desai, as well as an investigation into the multiple complaints made against him. They further demanded he be suspended for the duration of the investigation, and that he be prevented from speaking publicly about Palestinian issues during that time.

In an email sent by Kil to The Daily Vox, she further reiterated these demands, calling for Desai to apologise to all three complainants and a commission of inquiry into allegations of gender-based violence against Desai be instituted. The complainants said the commission should be appointed by April 1 2019 and should report back by May 1 2019.

Here is Desai in action. Well not that sort of action. But it seems he recruited former model Shashi Naidoo to their cause, who I noticed at the time looked really awkward.

I wonder if he me-tooed Naidoo too.

Update: I am told the Daily Vox, which is the source for this report, is an anti-Israel site. Which could indicate there is something to this, since I assume they wouldn’t want to be throwing one of their own under the bus.