Israel haters have been caught red-handed using bots to promote the boycott of Eurovision, “to create an impression of significant public support aimed at pressuring European broadcasting corporations and artists participating in the competition to succumb to the boycott.” What’s more, the culprits behind the campaign are linked to actual terrorists.

Today, Minister Gilad Erdan’s Ministry of Strategic Affairs revealed a synchronized campaign of fake bot accounts against this year’s Eurovision Song Contest to be held this month in Israel under the hashtag #BoycottEurovision2019. “Coordinated manipulation” campaigns are banned under Twitter’s terms and conditions. Among the performers targeted were Madonna, Bilal Hassani (France), Alessandro Mahmoud (Italy), Michael Rice (UK) and Sarah McTernan (Ireland), and participating countries’ broadcast authorities. It is estimated that the tweets had a potential reach of 9.7 million users.

THE FULL REPORT CAN BE DOWNLOADED HERE

The report revealed data indicating the use of a number of fraudulent methods – including bots and fake accounts using “Coordinated Inauthentic Behavior” to create the appearance of an authentic and wide-spread campaign, while hoping to manipulate public opinion, against artists performing at this year’s Eurovision Song Contest.

The campaign was originally launched under the hashtag #BoycottEurovision2019 by PACBI (The Palestinian Campaign for Academic and Cultural Boycott of Israel), the academic arm of the BDS National Committee (BNC) operating from Ramallah with close ties with the PNIF (Palestinian National Islamic Forces), an organization which is comprised of many Palestinian organizations including five terror groups, among them; Hamas, the PFLP and the Palestinian Islamic Jihad.

Two #BoycottEurovision2019 Twitter storms were also discovered to have been organized by an organization called #GroupPalestine.

#BoycottEurovision2019 is the most recent example of fraudulent methods used against artists planning on performing in Israel. Past cases include a fake-user Twitter campaign launched late last year against the singer Lana Del Rey, in which Twitter bots were found to have partaken in pressuring the artist to cancel her planned visit. Such actions are in line with practices employed by the cultural boycott campaign against artists and cultural figures intending to perform in Israel – which range from exerting indirect pressure to behind-the-scenes physical threats to the individual or his/her family, intimidation and shaming.

Naturally, the haters are not happy. Not happy at all. 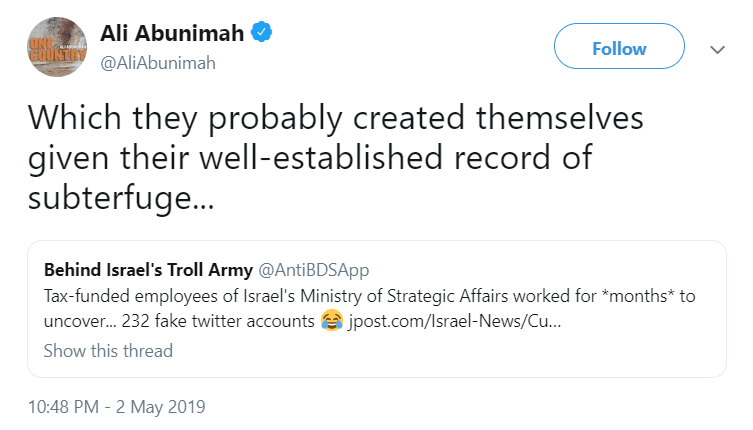 Given the Israel haters’ well-established record of subterfuge, the report’s findings are not surprising in the slightest. What is also clear is they will continue to cheat, lie and deceive towards pursuit of their ultimate goal: the destruction of the Jewish state.

The fact they are connected to those who pursue the same goal physically should speak volumes.