Anti-Israel site Mondoweiss have published a piece essentially complaining that Israel had the audacity to try to prevent civilian casualties when targeting Hamas and Islamic Jihad sites in Gaza.

Oh, and the details on the basis of which they are trying to demonize Israel are almost certainly false. 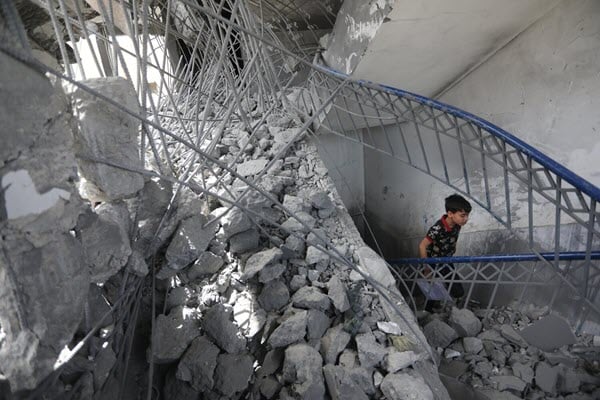 Azmi Doghmush, a building owner in Gaza, says that he received a taunting phone call from an Israeli intelligence officer on Sunday: “Sheikh Doghmush! How are you doing?… Count down five minutes and watch my proficiency and accuracy in toppling your building, but keep 50 meters away.”

The seven-story al-Qamar residential building in the Tel al-Hawa neighborhood in the Gaza City was then leveled by six Israeli missiles.

“He was honest, while my lifetime dream was turned into fallen dominoes,” Doghmush, 50, said.

The anonymous officer gave all tenants in the building five minutes to evacuate, he said. “I was screaming hysterically, this is a joke, don’t do it, this is foolish! Five minutes is not enough to pick up even a pencil, but the officer insisted that the countdown is running.”

While I am sure the warning occurred, I am willing to bet that the officer did not use the words as claimed by the Gazan. I know personally people in the air force – they are the best of the best. It just doesn’t ring true. But if that doesn’t convince you, just know that in the same report, Mondoweiss publishes this discredited lie:

The Palestinian Ministry of Health in Gaza confirmed that 25 Palestinians, including two infants, a toddler, and two pregnant women, were killed in the Israeli airstrikes, before an Egyptian-mediated ceasefire agreement between Israel and Palestinian factions in the besieged enclave was declared.

Also bear in mind that their source – the Palestinian Ministry of Health in Gaza – is a Hamas organ. Yet Mondoweiss quote them as a credible, objective source of information.

And even if this conversation occurred exactly as reported – which I almost certain is not the case – it would still have saved lived of civilians!

There is a reason I refer to Mondoweiss as MondoScheisse.