This flyer was posted by my university’s SJP chapter. I fished it out of the trash so that you can read it. 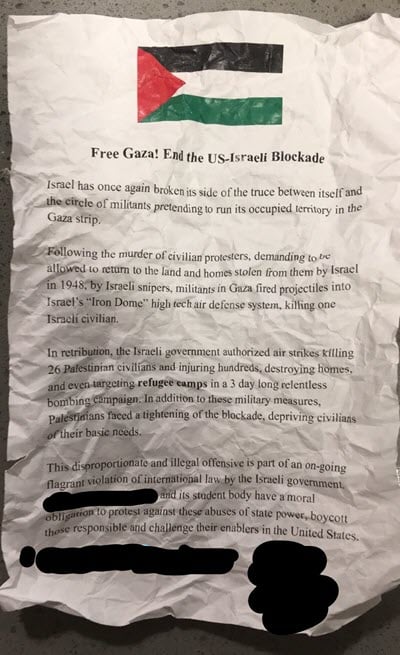 I am glad he or she did – it is another example of the malicious lies and support for terrorism of Students for Justice in Palestine.

Israel has once again broken its side of the truce between itself and the circle of militants pretending to run its occupied territory in the Gaza strip.

Israel did not break any truce (not that any promise of a ceasefire by Hamas and the other terror groups (not “militants”) is anything but an attempt on their part to recharge and replenish for continued rocket fire and other terror activity). And they are not even “pretending” to run Gaza (which is not occupied) – they are too busy devoting their time, energy and resources to murdering as many Jews as possible.

Following the murder of civilian protesters, demanding to be allowed to return to the land and homes stolen from them in 1948

As I explained here, these “civilian protesters” were two known Hamas terrorists killed after terrorists fired at IDF troops, and two rioters engaged in violent protests that even involved gunfire from the palestinian side. As for the idea that we stole homes from them in 1948, we won a war not of our choosing after the Arabs rejected a partition plan. Any Arabs that were willing to live here in peace stayed.

No, the terrorists fired over 600 rockets at Israeli population centers, essentially placing over 600,000 civilians in the firing line. It is ridiculous to suggest the terrorists were deliberately firing rockets at our Iron Dome and not attempting to kill and maim Israelis. And they did not succeed in killing only one Israeli – they murdered four Israelis, including a Bedouin – not to mention a palestinian toddler and her pregnant mother.

Note also how SJP play up the “hi tech” nature of Iron Dome, yet call the deadly rockets from Gaza mere “projectiles.”

At least 17 of the palestinian casualties have been shown to have been terrorist operatives or members of terrorist organizations. 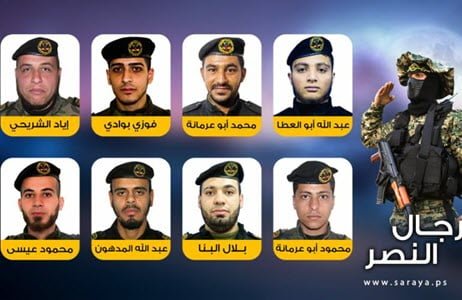 And the air strikes were not “retribution” – they were an attempt to prevent more Israelis from being killed.

As usual the IDF targeted Hamas and Palestinian Islamic Jihad (PIJ) positions across Gaza. The targeting was pinpoint, and any homes damaged were collateral damage, the result of the terrorists trying to hide behind civilians. Even then, the IDF warns people in the targeted areas of incoming strikes, to try to prevent civilian casualties.

There was nothing disproportionate or illegal about Israel’s rather muted response to defend hundreds of thousands of Israeli civilians from this latest mass murder attempt. The ongoing flagrant violations of international law are by the Gazan terrorists being defended by SJP and others.

Remember, these lying terror supporters are lauded by the likes of Linda Sarsour.

Update: SJP have certainly been busy.