Home Guest Posts If Not IfNotNow, What Is It? (Part Two)

IfNotNow is one of three sibling organizations which were “incubated” at Momentum Community, an organization dedicated to crafting mass protest movements. They are in the business of marketing outrage.  And as it happens, Momentum is headquartered in Boston, home of IfNotnow Boston.

IfNotNow is one of Momentum’s prize babies; there are two others: Cosecha Movement, the other sponsor of the current protests against ICE at detention centers, and Sunrise Movement, an environment-related group which has been instrumental in pushing Alexandria Ocasio-Cortez’ Green New Deal (As you may have heard, Alexandria Ocasio-Cortez began promoting Never Again Action’s fundraiser within its first hours). As in any other family, the Momentum siblings are closely interconnected and gather together periodically to share experiences and their common culture. One of Momentum’s founding team members is Max Berger, also a founder of IfNotNow. The director of Momentum, Lissy Komarow, is also a founder of IfNotNow . Momentum’s Director of Development Davida Ginsberg is a leader of IfNotNow Boston. Emily Bloch, one of the IfNotNow members who walked off Birthright, is also an organizer with Cosecha, the immigrants’ rights organization currently partnering with Never Again Action. Of the 44 Momentum trainers listed on their website, eight mention involvement in IfNotNow on their bios, including prominent IfNotNow leaders Emily Mayer, Yonah Lieberman, and Max Berger.

These trainers provide the ideological and tactical body of knowledge which is shared with all three branches of the Momentum family. For example, from IfNotNow/NeverAgainAction activist Miles Meth: 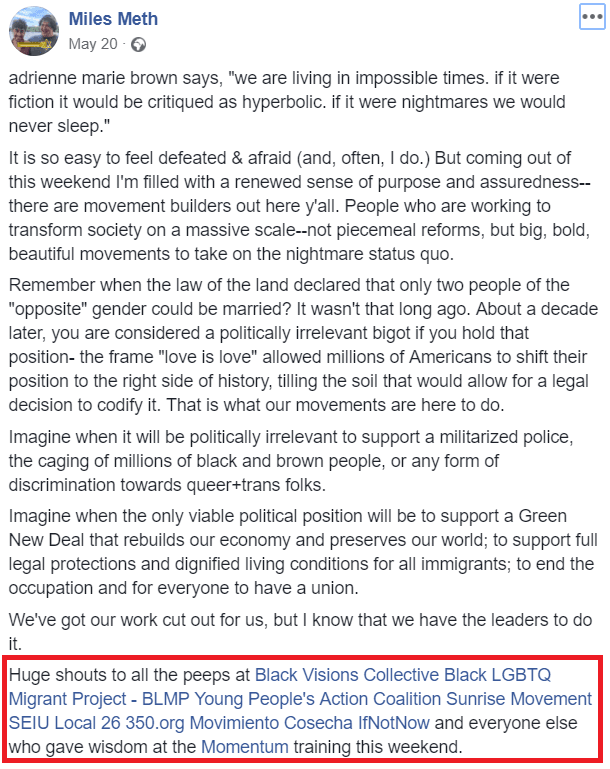 As Momentum founders Paul Engler and Carlos Saavedra put it:

“From Cosecha organizing protests in front of Trump tower and fighting for driver’s licenses for all, to If Not Now bringing Birthright trips to the forefront of debate in the Jewish community, to Sunrise creating trigger events and hitting the front pages of newspapers around the country, our bold experiments are just beginning. Moreover, because these experiments come out of the same Community of Practice, we all still strategize about best practices, share successes and innovation, and continue to be in community together, as organizers, roommates, partners, and more”.

These groups are so interconnected that donations to to Cosecha (as the Never Again Action fundraiser purports to do) invariably benefit all the siblings in the Momentum family, including IfNotNow. Not only do they all feed from the same trough ideologically, they all benefit from the parent organization’s fundraising (Ayni Institute), if not in actual cash grants than in the provision of Momentum trainings. Ayni received over $1 Million in donations during 2017 according to their most recent publicly-available 990 form. It is the fiscal sponsor of Momentum, and they gave nearly $200,000 to Momentum in 2017. Momentum runs training sessions (usually involving three days of sessions, lodging, and food) for a fee but they are generous with scholarships and say nobody will be turned away for lack of funds. Never Again Action’s successes in the ICE protests will reflect well on the Momentum family, improving Ayni’s ability to fundraise for programs that will benefit all their incubator hatchlings. Ayni founders Saavedra and Engler are proud of their offspring’s successes and use them for future fundraising.

In addition to generating more money, the success of these protests raises the profile of the IfNotNow activists involved, gives them access to a larger mailing list and more social media followers, expanding their circle of influence. So, for example, new participants in the ICE protests who friend or follow Never Again Action activists such as Miles Meth, Netanya Perluss, or Alyssa Rubin will be reading their anti-Israel social media posts, receiving invitations to join IfNotNow events, and to contribute to IfNotNow fundraisers. Having encouraged young Jews to express their outrage toward the “concentration camps” run by ICE, that same outrage will be easily channeled toward Israel when analogies to the treatment of Palestinians are made. And it’s already beginning. 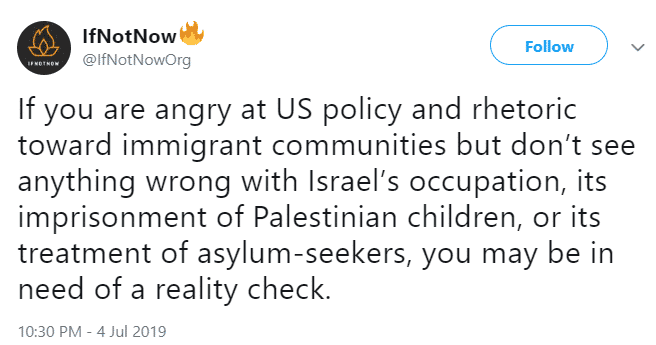 Why isn’t Never Again Action being transparent about their roots and connections to IfNotNow? They know they are unpopular with mainstream Jews, who are turned off by their anti-Israel message. This is a way for them to burnish their image and make their activism more palatable to the Jewish public. Social media is full of posts from staunch Israel supporters who say they would march with Never Again Action or donate to their cause even if they are members of IfNotNow because one type of activism has nothing to do with the other.

As I hope this post points out, it is impossible to disentangle their anti-Zionism from their pro-immigrant advocacy; if you participate in one you invariably strengthen the other as well.

(In addition to Michael Elgort and Elder of Ziyon, I wish to thank CambellWriter, Naomi Schmall, Tali Goldsheft and many others who contributed ideas and encouragement to the writing of this piece)