A few weeks ago, I posted how the German-based BDS Wiesbaden group justified the Baba Sale Congregation synagogue in LA being defaced with “Free Palestine” graffiti, and then doubled down on their antisemitism.

Now, according to this Jerusalem Post report, we have not heard the end of it. 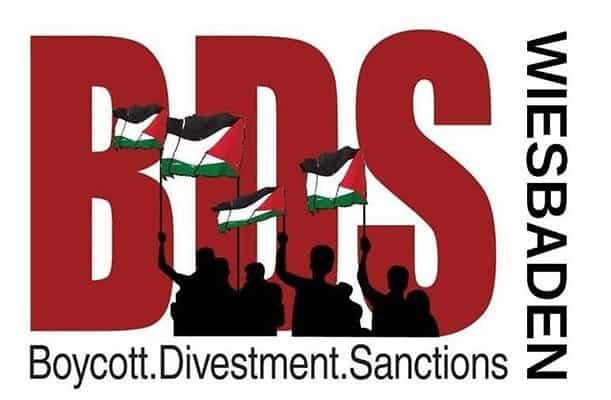 The commissioner of the Hessian Federal State Government for Jewish Life and the Fight Against Antisemitism has filed a criminal complaint against the Boycott, Divestment and Sanctions movement’s chapter in the German city of Wiesbaden.

The “Wiesbaden branch of the antisemitic BDS movement stoked incitement on social media that targeted an American synagogue with antisemitic insults” last Thursday, Becker told The Jerusalem Post on Sunday. “Wiesbaden termed the State of Israel, in its statements on social media, as a ‘Zionist colony,’ and the flag of the Jewish state as a symbol of a genocidal, colonialist ideology.”

The commissioner said he considers the group’s statements on social media “deeply antisemitic,” and that the tweets exceed the threshold of incitement.

Specifically, Becker cited statements made by the group about the American synagogue, which it called a “Zionist organization,” and said that anyone who “shows the Zionist flag must be confronted with the crimes of the Zionist colony.”

“With this statement, BDS Wiesbaden refers to a photograph of the interior of the synagogue, in which, among others, the Israeli flag can be seen,” said Becker, adding that “the Wiesbaden chapter emphasizes that graffiti on synagogues ‘would not occur if they did not act as messages of the Zionist colony,’ and ‘that a house of prayer should not be decorated with the symbol of a genocidal, colonialist ideology.”

He said that their statements demonstrate that “the BDS movement is not only about criticism of Israeli government action, but with the name of ‘Zionist colony’ denies the existence of the entire State of Israel.

“This is pure hatred of Israel, and the Wiesbaden BDS chapter has very clearly dropped its antisemitic mask,” said Becker, who is known to have gone to great lengths to combat rising Jew-hatred in Germany.

Also according to the Jerusalem Post: why not just screenshot part of my blog post, which shows more of BDS Wisebaden’s antisemitic tweets, without linking to my post or showing any form of attribution? 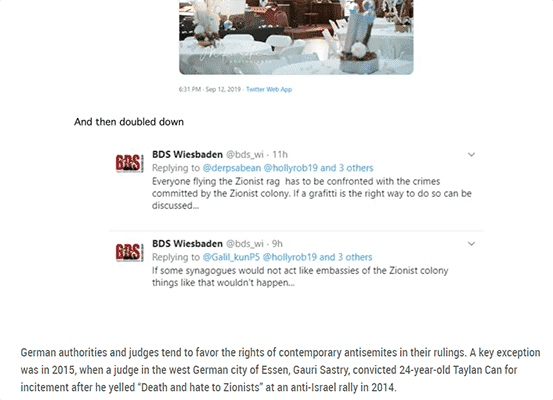 I think I’m as offended by the sloppiness of this as I am by their efforts to avoid citing me at all costs.