Holocaust survivor Professor Harold Kasimow recently spoke at Benedictine university about his experience during the Holocaust.

Here is a bit about his story.

Dr. Harold Kasimow still lives with the pain of the Holocaust.

“My memories of the Holocaust never really go away,” Kasimow said. “I live with it every day of my life, with the painful knowledge that nearly 1 million Jewish children died. I am one of about 5,000 who survived.”

Kasimow and his family were living in a small village near what is now Vilnius, Lithuania, when German forces took over the village on July 2, 1941. Kasimow was almost 4 years old at the time. He recalled going into hiding with his parents and two older sisters in order to escape the Nazis after a priest warned the family it was their last chance to escape.

“Most of the Jews in that area were shot,” Kasimow said. “As far as I know, we are the only family that survived from that area.”

Kasimow and his family eventually hid from the Nazis in a pit his father dug underneath a horse’s stall in a barn in what is now Belarus.

“We hid in barns and attics and many other places, helped by farmers in the area who risked their own lives to help us.”

Kasimow said more than 2,500 farmers were killed by Nazis for hiding Jews in their barns and on their property.

While hiding in the pit, Kasimow said, they were in total darkness, surviving on potato peelings from the farmer’s family and the occasional piece of bread.

“We shared the underground hideout with mice, frogs and worms,” he said. “The entire time we were in the dark, and we did not wash. We were all infested with lice. We lived there for one year, seven months and five days. We were buried underneath the earth.

“These early experiences profoundly impacted my life,” Kasimow said. “Surviving the Holocaust is not the end of the Holocaust. I know that my children are also affected by the experience. I’ve never really spoken to them about it, as my parents have never spoken to me about their experience.”

senior Ayah Ali asked a question which drew a parallel between Kasimow’s experiences and Israel’s treatment of the Palestinians.

So naturally when it was time for Q&A, this was an appropriate question for him:

Earlier this week, Holocaust survivor, Harold Kasimow spoke at Benedictine University. He described to us what it felt like to undergo horrific circumstances such as the Holocaust at a very young age. pic.twitter.com/njgmerzf8J

Note how Students for Justice in Palestine even proudly posted it. That pesky Holocaust survivor had it coming, after all.

Because asking a Jewish man who just recounted his experiences during the Holocaust about Israel’s alleged treatment of the palestinians and comparing it to the Nazi treatment of Jews during WWII is totally not antisemitic.

Neither is mentioning the word “Jew” but rather “Zionist.” Just ask the student in question (Aya Ali):

She also believes it is ok to verbally attack someone who spoke at a Jewish leadership camp: 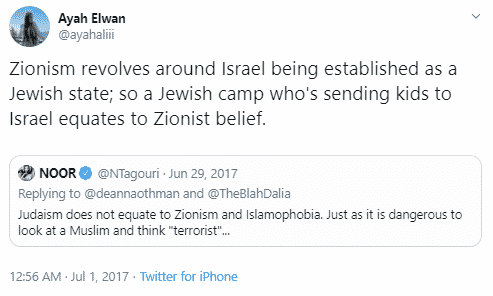 And draw your own conclusions what she meant by this (she claims she was misinterpreted): 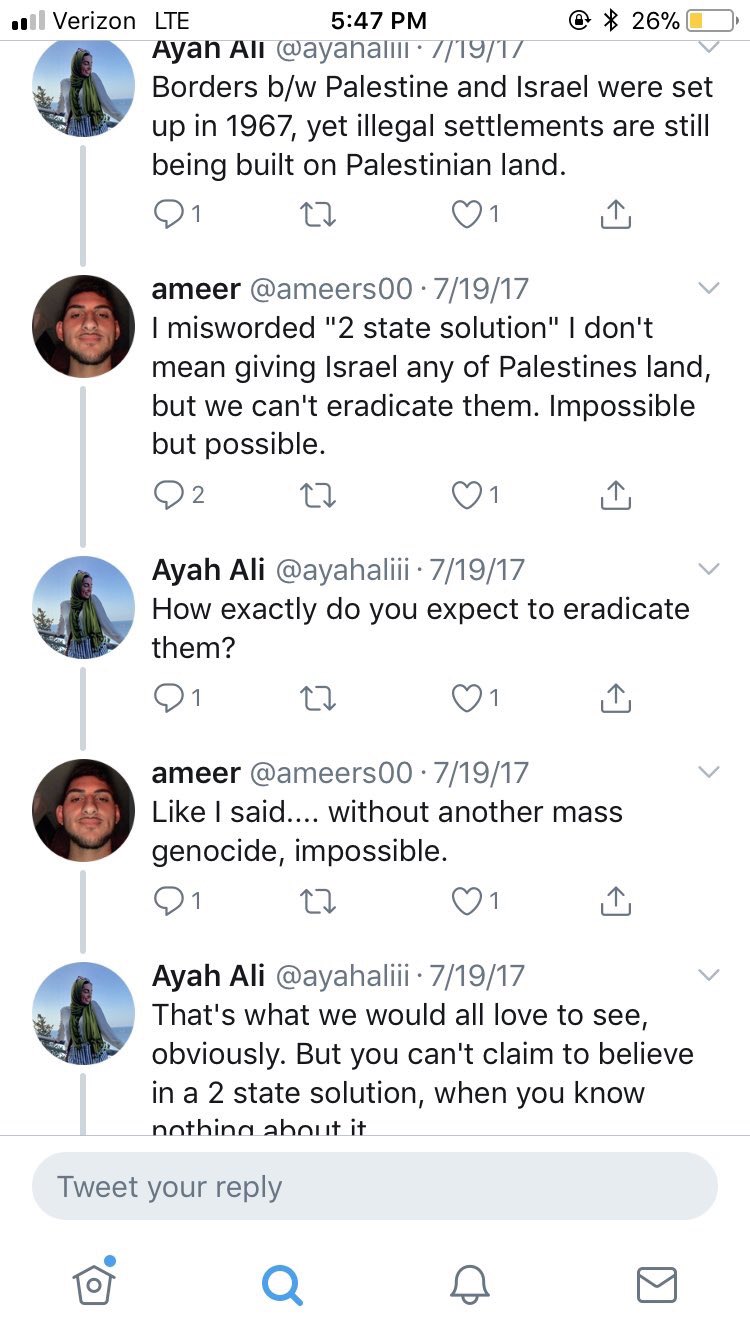 This is what BDS and hatred of Israel is about.

Update: “Why bring attention to this one?” 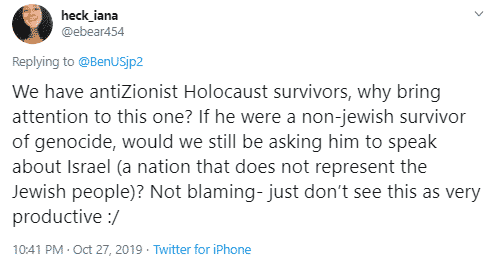