In time for Christmas, an anti-Israel propaganda website called Palestine Post 24 is trying to stoke up resentment from Christians against Israel by reporting about a church arson: 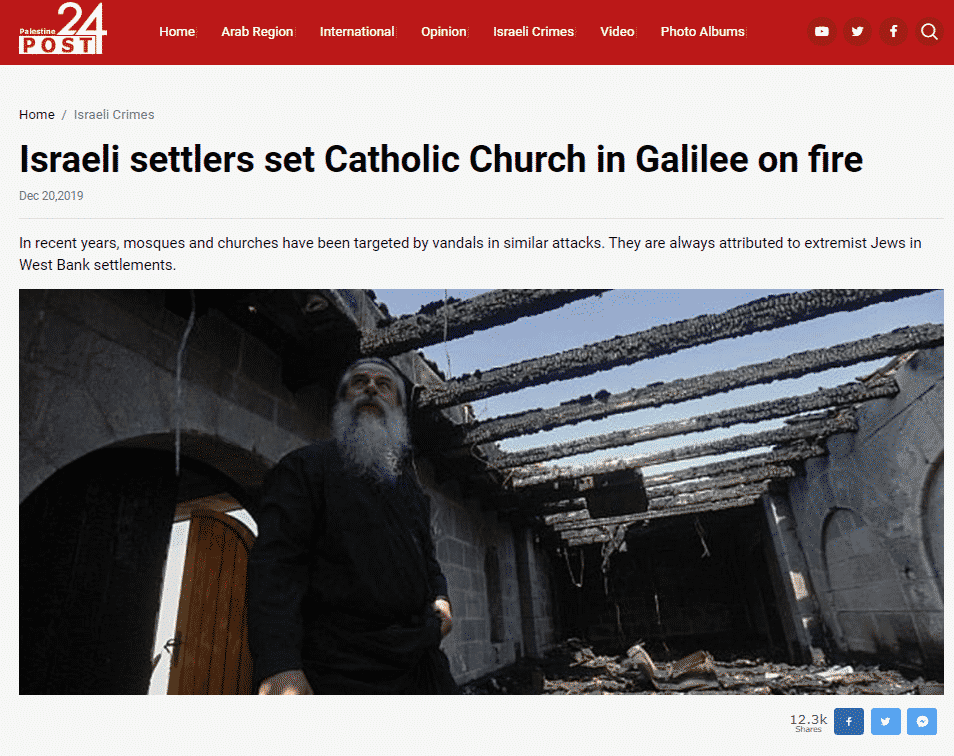 The Galilee church where Jesus was believed to have performed miracle of feeding 5,000 followers was set alight in arson attack carried out by extremist Jewish settlers.

Hebrew graffiti was also scrawled across the walls of Church of the Multiplication of the Loaves and Fish.

An adviser to the Catholic Church blamed Jewish extremists for the “deplorable” attack after Israeli police said there is a “strong possibility” the fire was started deliberately.

Did you catch this sentence buried deep down in the report?

This incident, which happened in June 2015, was not the first such attack to be carried by the extremist Jewish settlers against Palestinian Muslim and Christian holy sites.

When entering a direct quote from the Palestine Post 24 article to see if it appeared anywhere else, among the search results was this Guardian report, which contained some more details not mentioned by the palestinian propaganda site:

“This morning’s outrageous arson attack on a church is an attack on us all. In Israel freedom of worship is one of our core values and is guaranteed under the law,” Netanyahu said. “Those responsible for this despicable crime will face the full force of the law. Hate and intolerance have no place in our society.”

The Israeli president, Reuven Rivlin, said authorities would make every effort to apprehend those responsible. “Such terrible desecration of an ancient and holy place of prayer is an attack on the very fabric of life in our country, where people of different faiths seek to live together in harmony and mutual tolerance and respect,” he said.

Nor did they mention the follow-up:

A Jewish extremist convicted of carrying out a July 2015 arson attack at the Church of the Multiplication of the Loaves and Fishes in northern Israel was sentenced to four years in prison Tuesday.

In addition to the jail time Yinon Reuveni received, the Nazareth Magistrate’s Court ordered the 22-year-old to pay NIS 50,000 ($14,00) in compensation to the church. He was also handed an additional two years’ probation for the attack.

The complex reopened to pilgrims last February following eight months of renovation work at a cost of around $1 million, of which the State of Israel contributed almost $400,000.

Which shows up their claim

Such attacks have been on the rise because the perpetrators, who are being backed directly by the Israeli government, go unpunished.

as a lie, and the exact opposite of what is happening. Besides fact the perpetrator was punished, and the Israeli government was clear in its condemnation of his actions, such attacks are not on the rise at all.

The same cannot be said for attacks on churches in the palestinian-controlled territories.

Tags: Christmas Church of the Multiplication of the Loaves and Fish Israel libels Palestine Post 24