This is definitely a flying pig moment: rabidly anti-Israel Facebook page Quds News Network has indicated the 8-year-old palestinian boy found dead in a cistern had not been murdered by Jews after all. 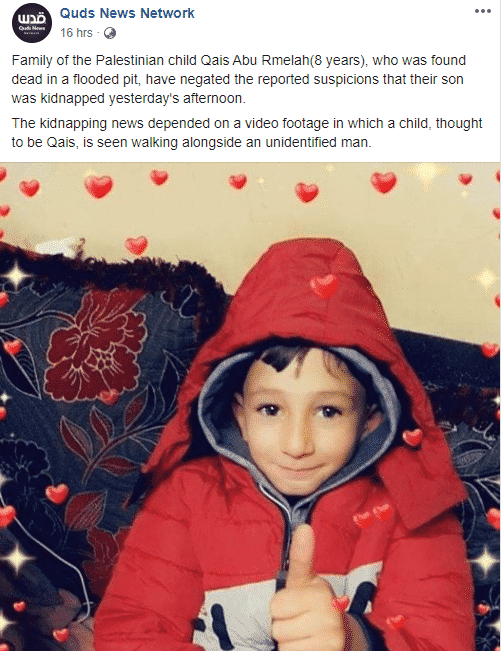 I guess when the boy’s own parents poured a dampener on the blood libel, even QNN could not continue with it. Although it hasn’t stopped George Galloway, who not only still has his tweet up, but has “pinned” it to the top of his Twitter timeline.

But don’t worry, Quds News Network have found a different way to use this tragedy to demonize Israel.

“I heard that there was a child from Jerusalem, who had been kidnapped or lost since the afternoon and had not come back home until late at night. So, the search operations took off but that was in vain”, said Khaled Olayyan.

The Palestinian former prisoner, Khaled Olayyan, told QNN that he went out with a group of young men from Jabal Al Mukabbir in southern Jerusalem at 9:00 pm towards Beit Hanina, where hundreds of Palestinians gathered to put a search plan, which may save the life of the then lost 8-year-old boy Qais Abu Rmeileh.

After several hours of search, the locals decided to empty a box culvert of rainwater using a vehicle owned by the Israeli rescue unit. At the same time, the locals found another box culvert and rushed to search for the boy inside it.

The Israeli police accompanied the locals but refused to cooperate or help them. It refused even to provide adequate lighting to help search for the boy. An Israeli lifeguard refused to dive inside the box culvert, claiming that “the water was too cold”.

Although of the weather temperature, which approached freezing yesterday, Olayyan “removed his clothes and kept with others to search for the boy for half an hour”.

After he and other young men left the water, everyone started to warm them. After an hour, their body temperature decreased and a medical intervention became necessary.

Olayyan stressed that the Israeli police did not cooperate with the Palestinians at all. It even started attacking the locals, who were searching for the boy, without providing any reasons. Stun and poisonous grenades in addition to Paton and rubber-coated metal bullets were used against the locals as if it was a confrontation, not a rescue operation.

Footage shows this to be another blatant lie – Israeli rescue forces were clearly in the water searching for the boy.