Quds News Network and other anti-Israel propaganda sites and people have claimed Mauritanian footballer Moctar Sidi El Hacen refused to sign a contract with an Israeli club in solidarity with palestinian Arabs. 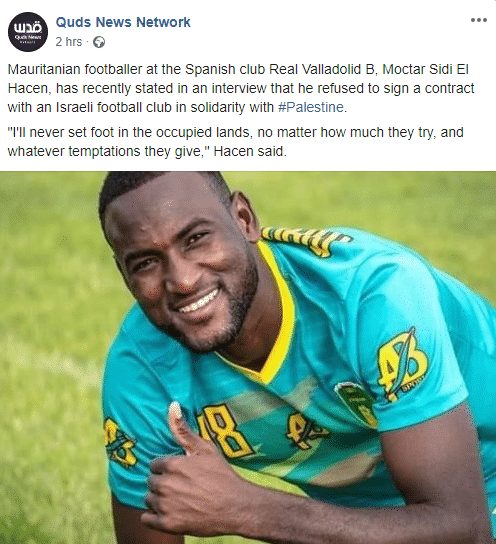 When Googling ‘Moctar Sidi El Hacen Israel’, the only relevant result is a Spanish article, which suggests (or at least the auto-translation of it does) that he refused an offer from Ashdod FC because of the relatively low level of the Israeli football league, and not because of any anti-Israel convictions.

Pucela (nickname for Spanish football club Real Valladolid) has at least two proposals from outside Spain, which do not quite convince the sports management,

One is of the highest category of Israel’s football, that of Ashdod FC, which was the first team to ask for the midfielder, but the low competitiveness of Israeli football makes even the player doubt the proposal.

Furthermore, when I enter the supposed quote – in both English and Spanish – there are absolutely no news reports about it.

In other words, this seems to be yet another case of Israel haters making stuff up. Because the truth continues to prove inconvenient for them.