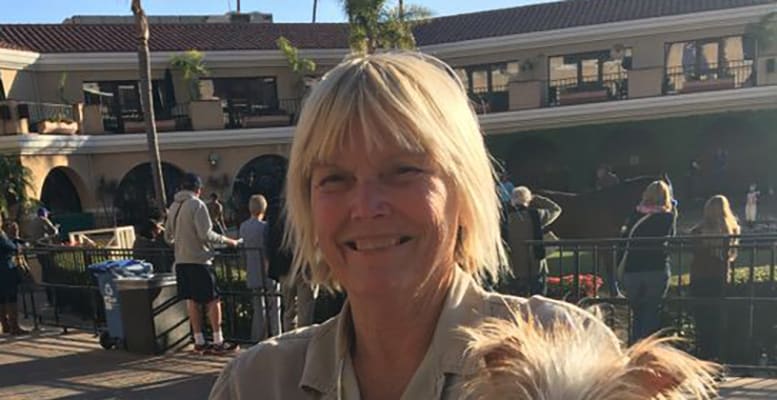 An Israel hater, Trea has posted the infamous map that lies. 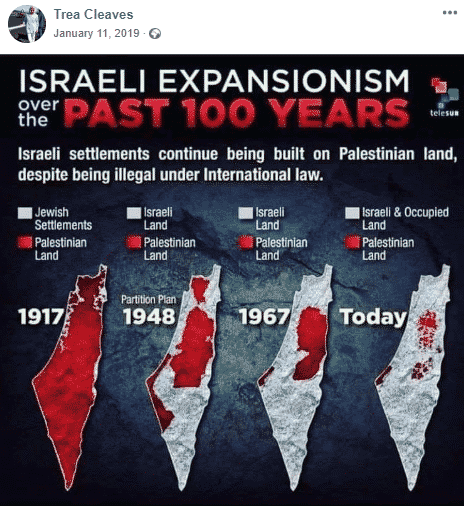 But don’t think that’s the root cause of her disdain for Israel. 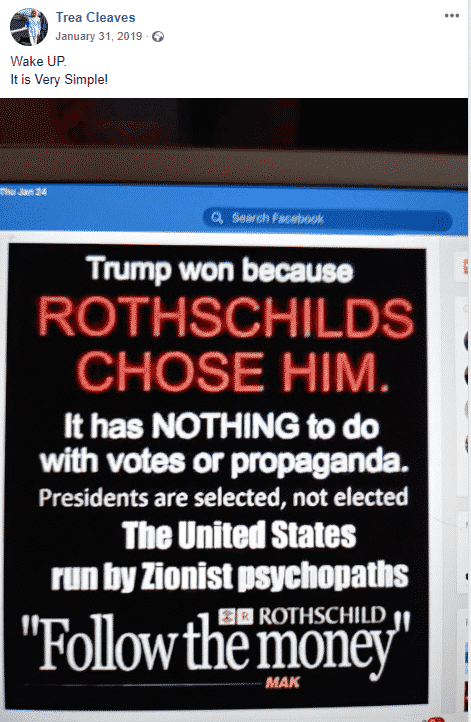 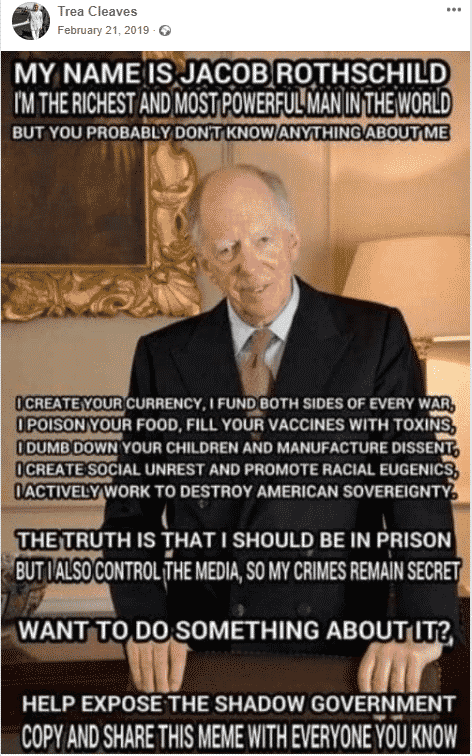 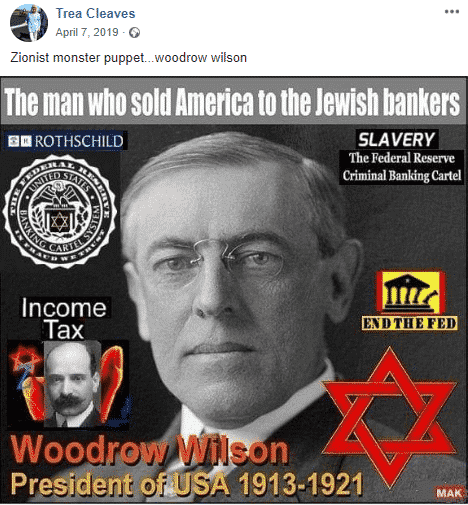 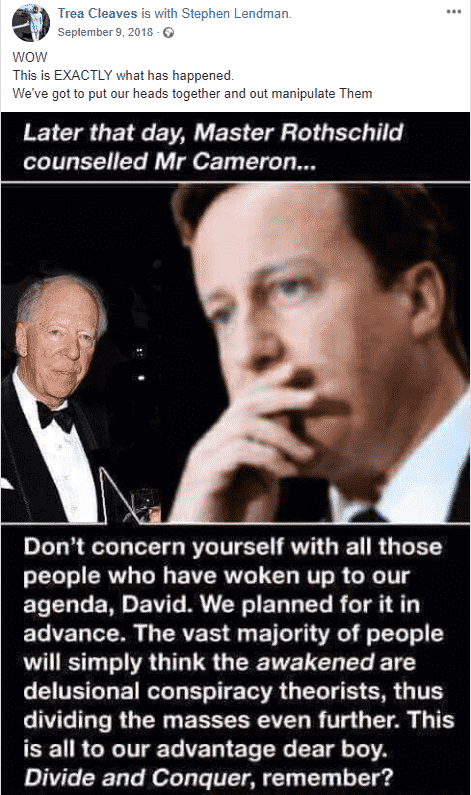 Like her fellow Jew hater Sharon Cooper, Trea is a big animal rights person, being the founder of CARE FARM California, Consortium to Alleviate PTSD with ART FARM, and Cowboy for a Day.

The Riverside Press-Enterprise says 58-year-old Franklin Cleaves and his 68-year-old wife Theresa each pleaded guilty to five misdemeanor counts and they were sentenced to three years’ probation. In exchange for the pleas, prosecutors dismissed two felony animal cruelty charges.

The judge ordered the couple to not own any horses while on probation.

Three years ago, animal control officers ordered the couple to feed the malnourished horses at their stables near Temecula. The horses were missing fur, their ribs were protruding and they had sores.

It was later discovered the horses were moved to other locations to avoid detection.

She and her husband claim innocence, and their story is…well just read it for yourself.

Franklin Cleaves, A paralyzed 100% Service Disabled Vietnam Veteran was moving from Temecula to San Diego with his 10 horses, 2 llamas and 6 dogs on Nov. 8, 2007. The owner of the ranch he was moving to called him to say that the ranch was destroyed in the wildfires which destroyed much of So. Ca. that day. (He did not return Franklin’s $2500 deposit claiming he did not have it. Franklin felt sorry for him.

Franklin called the FIRE HOT LINE prominently displayed by Riverside County Animal Control, and was given Jason Lopez’s address and phone number.
Jason Lopez agreed to board the horses and llamas for $1100 a month. Beginning Nov. 9, 2007. Jason was paid on the first of each month.
Franklin has to go to the La JOlla VA Hospital most days for treatment for his many injuries, so he never saw his horses in daylight.

On March 6, 2008, Franklin got a call from Tom Smith, another boarder, that Jason was leaving in the middle of the night with all his own horses.
Franklin saw his horses for the first time in daylight. They were skelletons.The police were called and they said it was a civil matter. Animal control showed up a ordered Franklin to remove his starved horses from the property or they would be seized.

Scott walker (Walker Advantage Coldwell Banker RE, Murrieta, Ca.) the actual owner of the property,had the water shut off to his ranch. So the starved horses were also deprived of water. It took Franklin and his helpers at least 3 hours each day to fill buckets of water from the nearest ranch for the horses!!!!!!!!!!!!!!!!!!!!!!!!!!!!!!!!!!!!!!!!

Franklin found a campground to move the horses to that had horse corrals.

On April 18, 2007, A few weeks after the STARVED horses were moved, a VERY HOSTILE WOMAN dresses as a US military sniper was caught by Franklin’s wife, Trea, parked by the horses.

This woman identifed herself as Riverside animal control, but had no name badge or business cards.

She photographed all EIGHT HORSES.

At 5 a.m., April 19, 2008, Franklin’s Thoroughbred Race Horse Stallion was stollen in a New rig. A Chaplin who lived at the campground witnessed this well.
The horse thieves even WAVED to him!!!! He thought Franklin was moving his horses himself.

Trea moved back to San Diego.

Franklin moved the horses to a property that had a 2 acre pasture. He paid several people to help him feed the horses.

Some one was stealing the hay, grain, dog food and items from his trailer.

So he found 400 acres to move the horses to.

EVERYONE KNEW HE WAS MOVING THE HORSES ON THE AFTERNOON OF NOV. 4, 2008.

The horses were seized that same day WITHOUT ANY NOTICE. THERE WAS A PAPER POSTED THAT THERE WOULD BE A POST SEIZURE HEARING IN RIVERSIDE, CA. ABOUT 60 MORE MILES AWAY.

When Franklin and Trea entered the PACKED ROOM, they both recognized the fake sniper. IT TURNED OUT TO BE LESLEY HEUNNEKENS. AN ANIMAL CONTROL AGENT WHO HAD LITERALLY BEEN STALKING US BEHIND OUR BACKS SINCE SHE WORKED WITH SCOTT WALKER TO TUEN THE WATER OFF TO OUR STARVED HORSES BACK IN MARCH!!!!!!!!!!!!!!!!!!!!!!!!!!!!!!!

WE WERE HOSTILLY TOLD BY THE MAN DIRECTING THIS KANGAROO MEETING “IF YOU MENTION BUDDY AGAIN YOU WILL BE KICKED OUT OF THIS MEETING.

THE MEETING WAS A JOKE, WITH HEUNNEKENS TELLING PREPOSTEROUS LIES THAT SHE HAD CONTACT WITH US. WE HAD ONLY SEEN HER THE 1 TIME THE EVENING BEFORE BUDDY WAS STOLEN.

WE IMMEDIATELY FILED AN APPEAL BUT NEVER HEARD BACK FROM ANIMAL CONTROL.

WE HIRED ATTORNEY TOM SMITH TO FILE SUIT ON ANIMAL CONTROL. WE GAVE HIM HIS REQUESTED RETAINER.

A MONTH LATER HE DEMANDED MUCH MORE MONEY. WE DID NOT HAVE IT.
HE TOLD ME ANIMAL CONTROL WOULD NOT RETURN HIS CALLS.

IN THE ALMOST 2 YEARS THAT THIS HAS BEEN IN THE RIVERSIDE COURT, THESE LAWYERS HAVE NEVER CALLED US, RETURNED A CALL, ANSWERED AN EMAIL. WE MUST GO TO COURT AT LEAST ONCE A MONTH AND WE ARE NEVER TOLD WHAT IS GOING ON.

I TRIED TO GET A DIFFERENT LAWYER, BUT WAS DENIED, SO I FIRED MY COURT APPOINTED ATTORNEY.

WE HAVE PARTS OF THE EMAILS THAT LESLEY AND TRYCE SENT TO EACH OTHER USING LESLEY’S ANIMAL CONTROL EMAIL. IT IS APPEARANT THAT THERE ARE MORE EMAILS…………

Maybe she blames their predicament partly on the Joooooooos

It seems they also used to run a non-profit called Lame to Fame foundation.

Lame to Fame Foundation was a corporation registered in the state of California.

It was a domestic corporation, meaning it was formed, as well as registered, in California. Its articles of incorporation were filed on September 12, 2007.

All of Lame to Fame Foundation’s powers, rights and privileges in the State of California have been suspended. This could have happened because they failed to file a return and/or pay taxes to the California Franchise Tax Board, or because they failed to make certain informational filings with the California Secretary of State. The specific reason for this suspension can be found by ordering a status report from the Secretary of State.

Probably the Jooooooos’ fault as well.

Trea, thanks for playing Anti-Zionist-Not-Antisemite. Unfortunately, you lose!