In October last year, I exposed the antisemitic and terror-supporting tweets of Bernie Sanders’ surrogate Amer Zahr. This post just gained much more traction, thanks to the below tweet by Bari Weiss of the New York Times.

This is much worse than Rashida Tlaib booing Hillary Clinton. Will it become a national story? https://t.co/fah4G4lbPK

Following Bari’s tweet, a “Bernie Sanders supporter and volunteer” claimed that Zahr deleted one of the tweets after she called him out on it 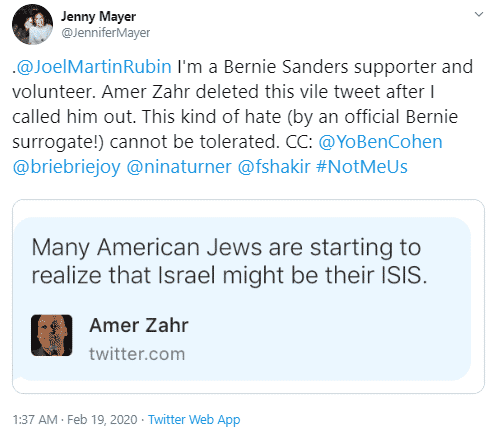 I checked and can confirm the tweet has been flushed down the memory hole.

I am not sure why the Bernie Sanders supporter and volunteer did not call out Zahr for the other vile tweets, and they still exist. Perhaps that is even more telling than the fact he was asked to delete the ISIS tweet.

In fact, he even added to the collection with this one, well after being announced as a Sanders surrogate.