Just when you thought having antisemite Linda Sarsour’s endorsement was bad enough, along comes another Jew-hating turd to endorse the candidacy of Bernie Sanders: “Comedian” Amer Zahr (hat tip: Marc).

Wanna hear a radical idea?!
I have been officially named as a surrogate for @BernieSanders 2020! I can’t wait to get on the road to spread the message of racial, economic, and social justice!#NotMeUs #Bernie2020 #AmuBernie pic.twitter.com/q1ukrK0Ts5

In Rashida Tlaib’s office today, we realized that there was something wrong with the map. So, I fixed it. @rashidatlaib #Palestine #FreePalestine #WeAreOnTheMap #Congress #Rashida #RashidaTlaib pic.twitter.com/q3hczwSGOH

and bullied a Lebanese-American for opening a franchise of an Israeli-created company. 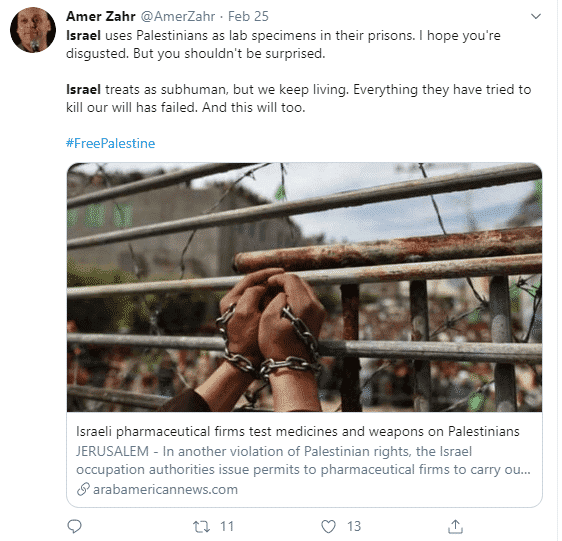 Denies the Jewish connection to Israel

(although seems rather confused)

Dehumanizes Israelis and her supporters

And is so dishonest, he even tries to spin the fact Arabs have complete freedom in Israel

And yes, he is a vile antisemite.

He takes potshots at Jews

Suggests the Jews are ‘white’

Form your own conclusion from this “comedy routine” of his:

So if you are someone who still supports Bernie Sanders, I really have to question your feelings about Jews – notwithstanding the fact Bernie was born one.