With yesterday being the 17th anniversary of ISM ‘activist’ Rachel Corrie’s death, the haters have gone into overdrive posting lies about it on social media.

Some, like this British filmmaker, claim she was a ‘peace activist’ killed while trying to protect the home of a palestinian family from demolition: 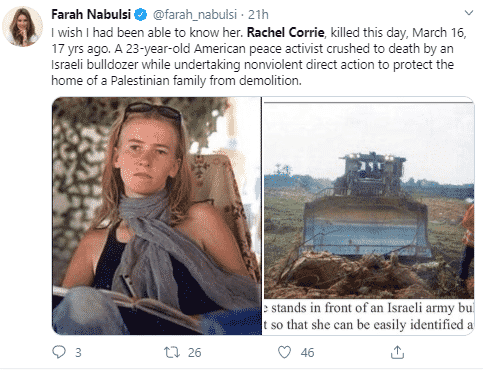 Hanan Ashrawi and others claim she was protecting many homes: 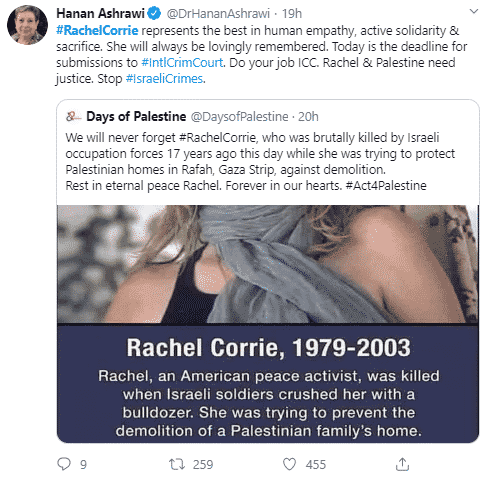 while Philip Giraldi, the antisemitic former CIA Operations officer in Europe and Middle East, takes it a step further: 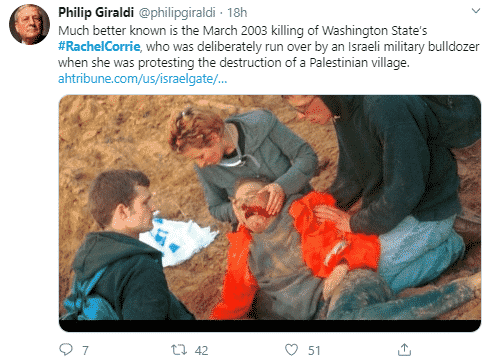 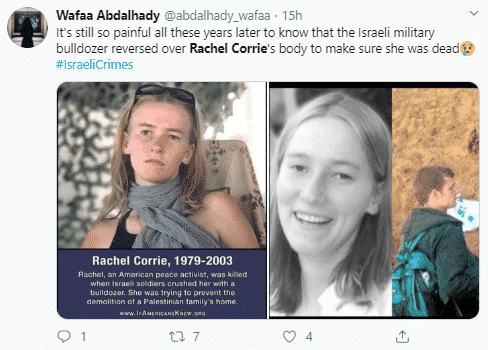 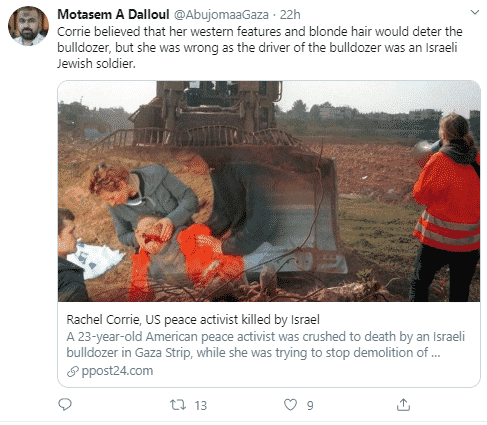 In light of these postings, now seems like a good time to debunk the libels.

The IDF was not trying to demolish a house/houses/village

The judge found that the mission of the IDF that day was confined to exposing the ground in a section of the Philadelphi Corridor. Leveling the ground and clearing it of shrubbery was necessary to expose hiding places exploited by terrorists, who used them to plant explosive devices and as camouflage for attacks. As the judge stated in his judgment: “The mission was not, in any manner, intended to destroy houses.”

The IDF’s actions that day were necessary to prevented hostile activities and acts of terrorism. In the relevant period during the Second Intifada, a great deal of terrorist activity was concentrated in the Philadelphi Corridor. Just about an hour before the incident, a hand grenade had been thrown at IDF forces there.

The driver did not deliberately kill her (nor was he negligent)

The court exonerated the State of Israel from any civil responsibility in this case.

As the judge found, while a terrible tragedy, the death of Rachel Corrie was an accident that cannot be blamed on the IDF.

However, moral responsibility for the tragedy can be assigned. It lies solely with the organizers of the ISM, who sent a young American woman into a battle zone and encouraged her to engage in highly dangerous activities.

Corrie was in the Gaza Strip on behalf of the ISM at the height of the Second Intifada. That Palestinian-led organization uses foreign nationals as bait, deliberately placing them in volatile situations certain in the knowledge that Israel will be blamed if they are subsequently injured or killed. In an interview the day Corrie died, Thom Saffold, a founder of the ISM, said: “It’s possible they [the protesters] were not as disciplined as we would have liked. But we’re like a peace army. Generals send young men and women off to operations, and some die.”

The court found that on the day of the accident the bulldozer was engaged in the military operational task of clearing the land in a dangerous area which posed a significant risk. These actions were designed to prevent acts of terror and hostility. The judge declared that the bulldozer’s leveling operation was “a war-related action” as defined by Israeli law, and therefore the state bears no responsibility for the damages inflicted on the plaintiffs.

According to the law, which is similar in many democratic states including the US, that settled the case and there was no legal need to discuss the cause of action. However, given the contentious nature of the case, the judge decided to go beyond the legal requirements and examine the merits of the claims made by the Corrie family and their supporters.

The day of the accident, Corrie and other ISM members risked themselves by directly interfering in the IDF bulldozer activities, blocking their paths with their bodies. The IDF soldiers warned off the activists repeatedly and took great care to avoid the foreigners, changing their place of operations time after time.

The bulldozer involved in the accident was a DR9, a very large vehicle. The field of vision of the DR9 is extremely limited, not least due to the heavy shielding necessitated by attacks on bulldozer drivers. When the involved bulldozer turned and pushed a large pile of debris, Corrie was kneeling on the ground and was in a blind spot of the operator’s field of vision, behind the bulldozer’s shovel and the pile of dirt. Accordingly, as the judge found, there was no way in which the bulldozer driver could have seen Corrie.

The judge based his decision not only on evidence provided by the state, but also on an expert testifying on behalf of the Corrie family. This expert determined that the driver could not and did not see Rachel Corrie due to the nature of the vehicle he was operating.

Based on the evidence provided by four separate experts – including the one hired by the Corrie family – the judge found, this was a very regrettable accident but not a deliberate action. It was determined that that Corrie had risked her own life by placing herself in a dangerous situation, kneeling in front of a bulldozer whose driver could not see her. The judge also unequivocally determined that there is no basis to the claim of the plaintiffs that the bulldozer driver negligently caused the death of Corrie.

Corrie was not a peace activist

Rachel Corrie was not pro-peace. She was an Israel-hater who was a member of the ISM, a pro-terrorism group that canoodles with terrorists. 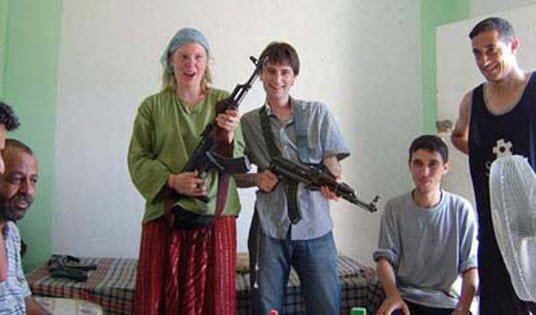 She also hated the USA. 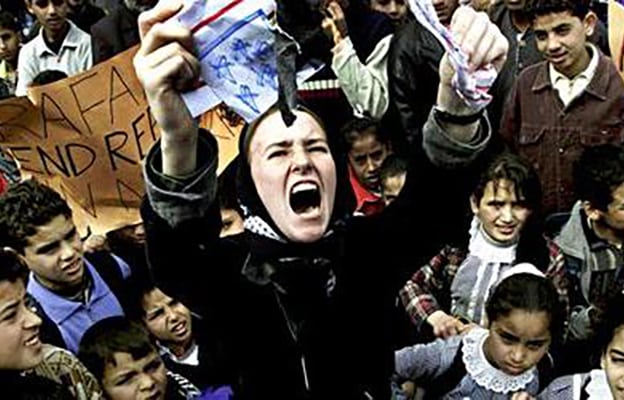